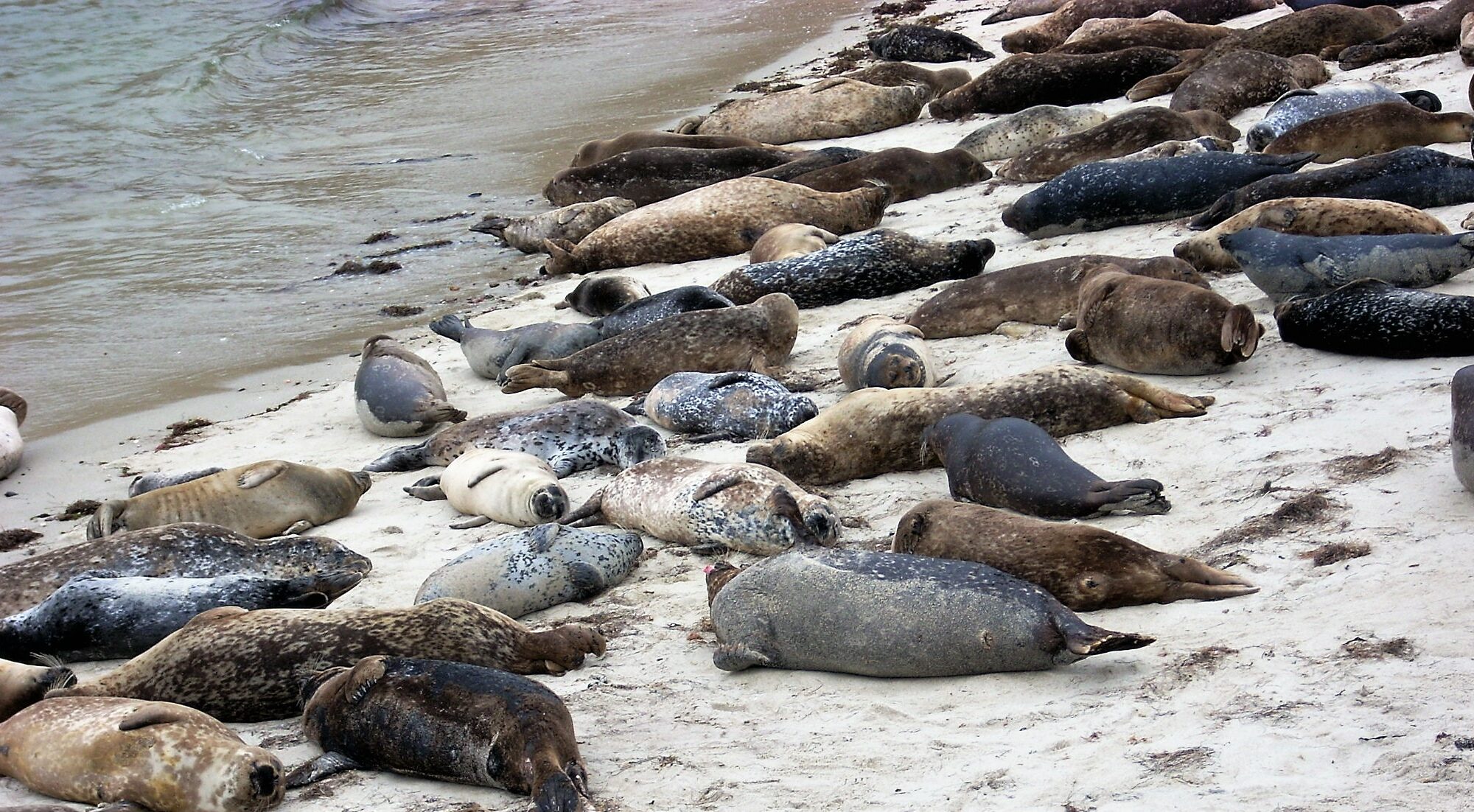 One of my favorite places to bring family and friends from out of town is La Jolla! Our absolute favorite place to visit in La Jolla is at the Children’s Pool, Point Mencinger, and Casa Beach. We love to see if the La Jolla harbor seals are hauled out on the rocks or the beach.

Did you know that Point Mencinger and the Children’s Pool is a Pacific harbor seal rookery? (A rookery is where the seals mate and raise young.)

And just north at Point La Jolla, there is a California sea lion rookery! The coastline of La Jolla is magical.

On August 17, my girls and I went on a little pinniped adventure.

Let’s now take a look at what we saw, and as a bonus for you and as well as for me, I have listed several La Jolla harbor seal facts.

First, it blows me away that I never knew that the formal name of this area in La Jolla is Point Mencinger.

Below is a photo during a King Tide, so the tide was super low.

The Pacific harbor seals (Phoca vitulina), considered true seals, have made the Children’s Pool their sanctuary for many years.

They also have weak pelvic muscles, so they slowly inch their way onto land in an undulating motion.

—>Checking Out the California Sea Lions in La Jolla<—

By contrast, a California sea lion has external ear flaps and huge and robust front flippers, which allow them to walk on land.

So how exactly did the Children’s Pool in La Jolla come about?

The coastal waters offshore of La Jolla are very rough. Furthermore, many who attempted to swim would drown in the early days.

Because of this, in 1930, local philanthropist Ellen Browning Scripps donated the monies to build the Children’s Pool wall and the observation deck as a safe place for children to swim in mind.

At the time, no one had any idea that this spot was a seal rookery until long afterward.

According to the Seal Conservancy, the La Jolla colony consists of 200 harbor seals that utilize this area.

It is rare for harbor seals to haul out near humans, making this location special and unique. 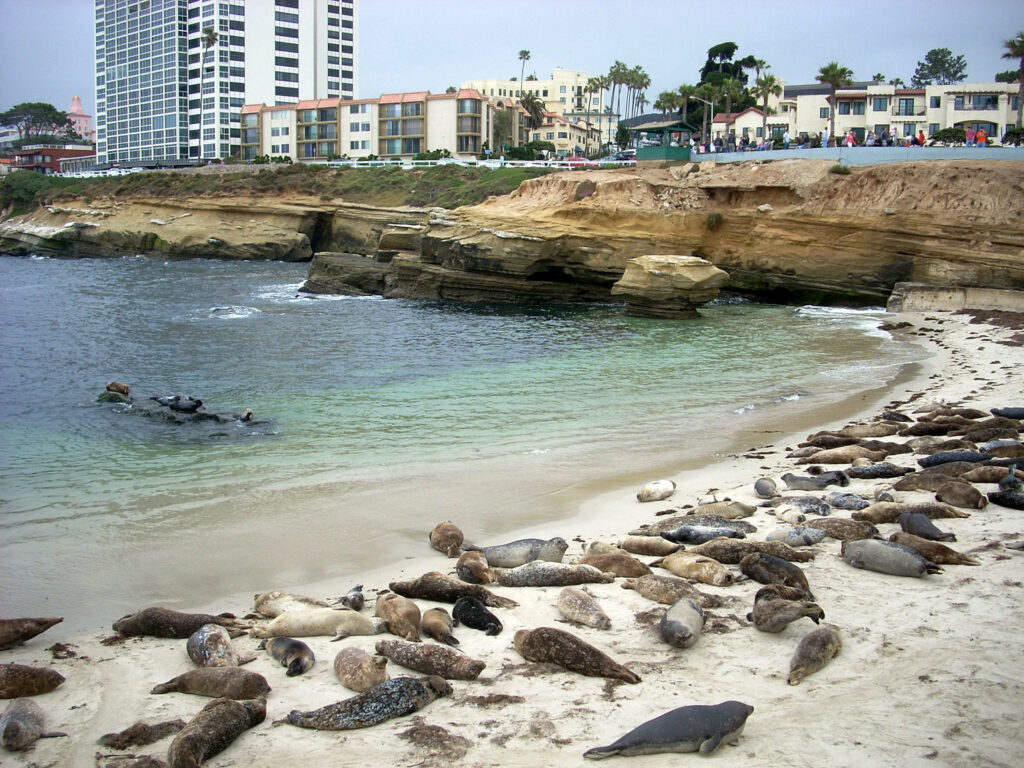 Over the years, there has been a long contention concerning Children’s Pool Beach.

Sometime in the mid-1990s, the seals started returning to the beach. The lifeguards were not sure what to do.

Back then, a rope divided the beach, and the seals had the left side while the humans took over the right.

I remember that the Children’s Pool was constantly closed because the bacterial levels were off the charts due to the excrement of the seals.

Because of this, an active public fight for the removal of the seals began. Several proponents of the seals’ removal cited that the idea of building the Children’s Pool was for children to swim in La Jolla.

And let me tell you that it has been a long and drawn-out fight between the city, state, and federal agencies.

Finally, the La Jolla Friends of the Seals (LJFS), founded in 1999, were able to get the city to close the South Casa Beach/ Children’s Pool to the public during the pupping season in 2014.

Additionally, in 2015, volunteer docents from the LJFS were set up nearby to monitor, mediate and educate the public on the importance of the closure and be present for any questions.

Every December 15 to May 15, Children’s Pool and South Casa Beach are closed to humans, and only seals are permitted on the beach.

Here is some terrific information. If you would like more details-Time the Line of Events Affecting the La Jolla Seals

When is the Best Time to See Pacific Harbor Seal? 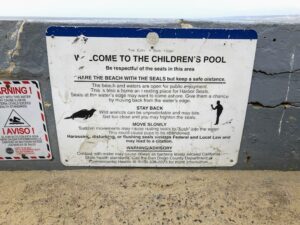 You will likely see the most Pacific harbor seals at the Children’s Pool in La Jolla from April 24 to June 6. Why?

For a further explanation, why see below.

You are least likely to see any seals on the beach between 8 am to 6 pm during July, August, and September.

Length- up to six feet with males slightly larger

Pupping Season- December 15- May 15, with the majority of newborn pups arriving between February 8 and March 8 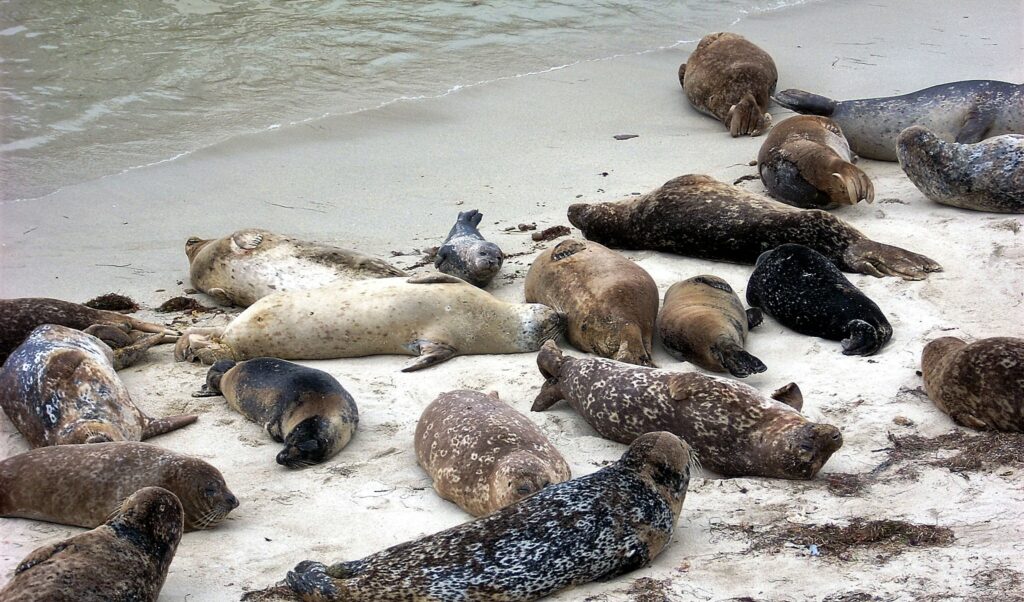 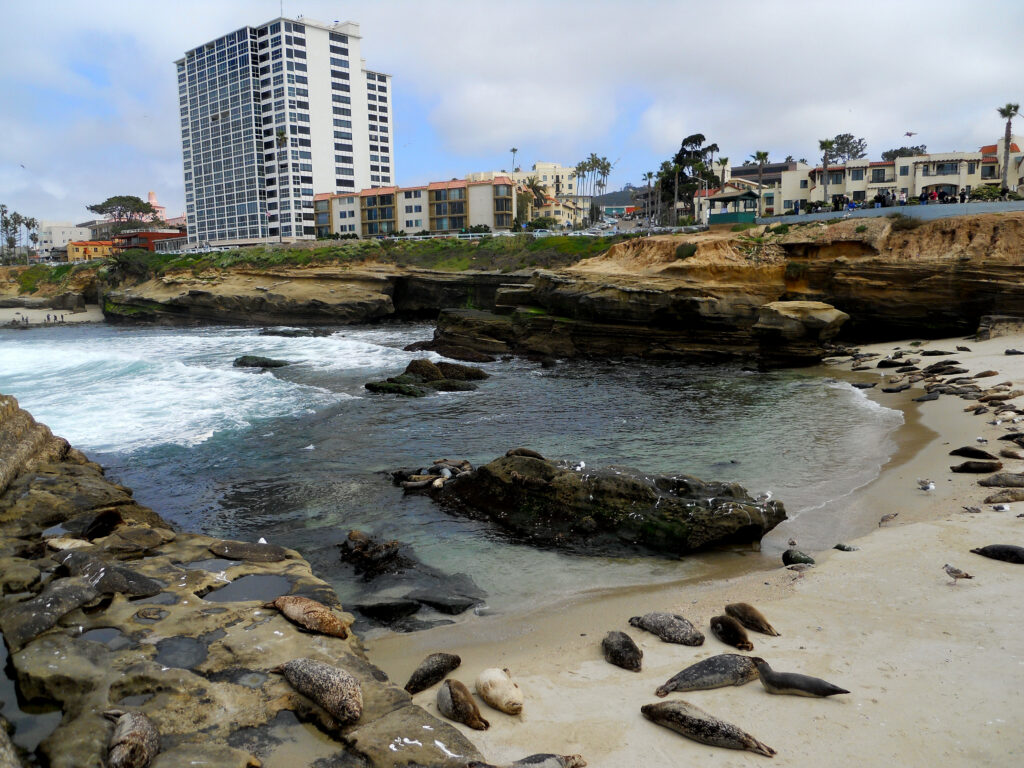 So here are a few photos of what my girls and I were able to witness. As you can see, there were no harbor seals on the beach; they were only on the rocks behind the observation deck.

What do you think? If there is one thing I hope you take away after reading about the La Jolla harbor seals, distance is your friend. Do not approach a seal on the Beach. Never, ever touch a seal, especially a pup, because there is always the chance that the mother seal will abandon it if it recognizes an unfamiliar scent.

Everyone will be happier in the end.