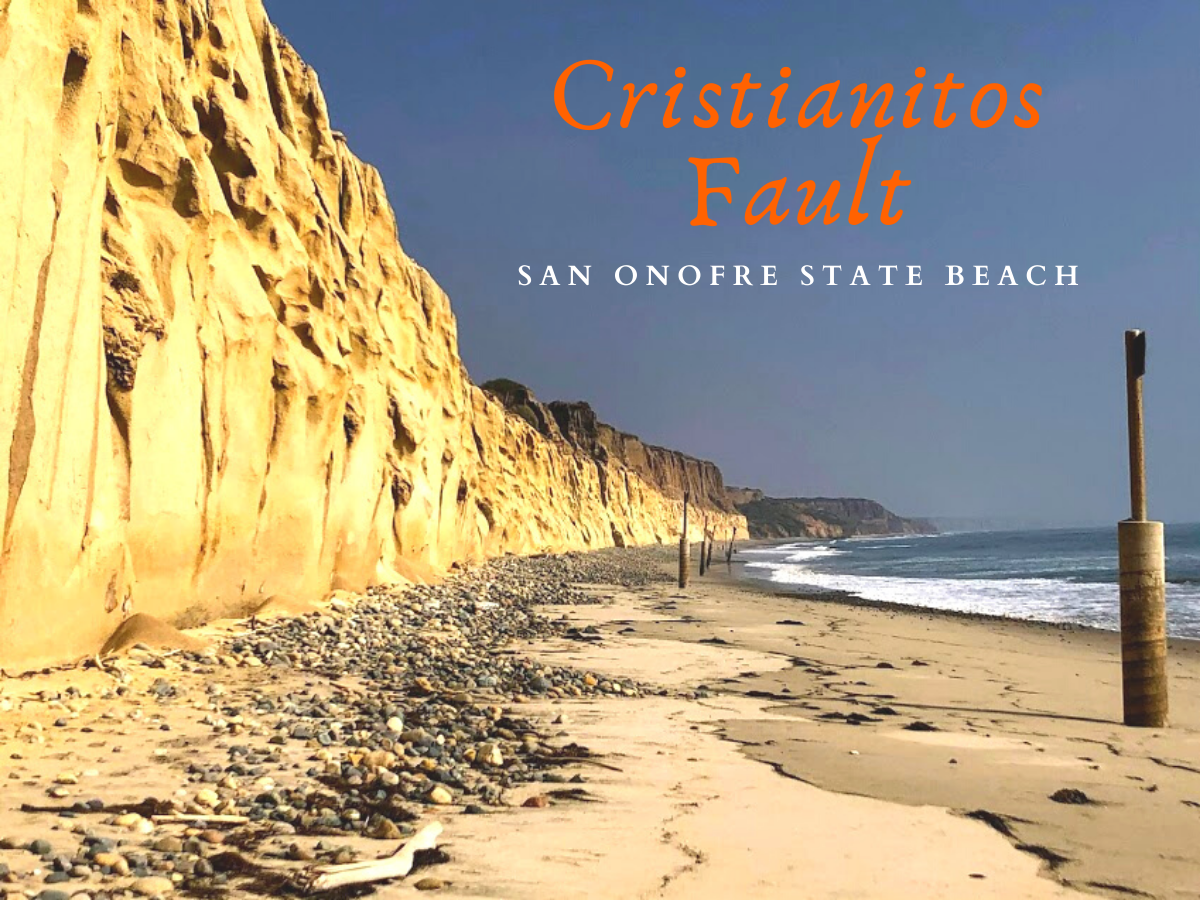 Hey! Have you ever seen an earthquake fault line? No? Well, today is your lucky day! Referred to as the Cristianitos fault, you can walk right up to it over at San Onofre State Beach.   Now I need to state this fact upfront so there will be no confusion. I am not a geologist; therefore, please be patient with me. If I make an incorrect claim, do not hesitate to correct me in the comments at the end of the post. I love to learn new things and will not be offended at all. Several references have helped me tremendously, but I have left them below. I encourage you to check them out!

Let’s take a trip to San Onofre State Beach (my favorite beach in San Diego) and investigate the Cristianitos fault line. As a bonus, I will highlight other unique geological features here at this fabulous State Beach.

One more thing. Did you know that the San Onofre Nuclear Generating Station (SONGS) is less than 800 yards away from this earthquake fault line?

Wait, what?! A nuclear generating station? Next to a fault line?

SONGS is no longer active and has been decommissioning for several years now. But obviously, the question is, why build a nuclear power plant right next to an earthquake fault line? (Click on the above link for more detailed decommissioning information.)

This adventure’s best starting point would be over at the San Onofre Bluff’s Campground, located off Basilone Rd on Interstate 5.

There is some fantastic ocean view over here on the bluffs of the campground. The remnants of marine terraces are visible from the top of the San Onofre, and I found something special about this area. These terraces are the last classic mainland sequences remaining on the Southern California coast.

Once exiting the freeway, proceed west and follow Old Highway 101 until it ends (about 3 miles). You will come upon a front kiosk, but if it happens to be empty, make sure to get out of your car and pay the 15-dollar entrance fee via the ticket booth machine.

Once inside the campground, park near the entrance at Trail One. Once on the trail, follow the path down to the beach, and make a right to head North. The trail down to the beach is a bit steep, so I would suggest a good pair of closed-toe shoes, as there are many rocks on the beach.

Today I will be concentrating on San Onofre State Beach, which is a collection of marine terraces.

The San Mateo Formation and the Cristianitos Fault 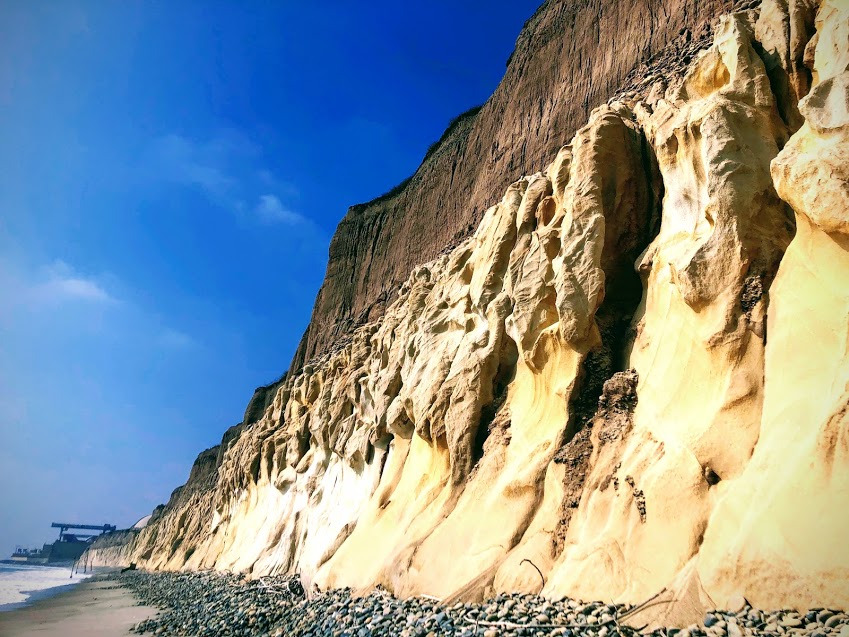 After making a right at the trail’s end, follow the beach until you reach a gap in the bluffs. This gap, North of Trail One, is known as the Echo Arch Campground and used to be a popular spot for camping within the ridges. But unfortunately, due to a cliff collapse, this area was closed down to camping in 1996.

The San Mateo Formation is a light-colored, poorly cemented sandstone over five million years old. Based on fossil evidence, geologists discovered that this formation was uplifted to near sea level approximately 125,000 years ago.

There are many gullies and narrow entrance points that you can explore but with extreme caution. The feeling of being surrounded by towering sandstone cliffs gives you the illusion that you are underneath the ocean. It can sometimes seem a bit overwhelming, especially if you are claustrophobic, so take that to heart before entering any of these bluff openings. I strongly suggest not touching a thing.

It is eerie hearing sand blowing off the bluffs while walking within the gullies. The falling sand sounds very similar to that of a drizzle of rain.

From the exposure in bluffs of San Onofre, the Cristianitos fault extends inland on a bearing of WNW for about 21 miles (35km).

So the primary question is why they would build a nuclear generating station adjacent to an earthquake fault line. Well, because it has been scientifically proven that this faultline has not moved for over 120,000 years. Now how on earth did they figure this out?

Now, look closely at the photo up above.

Do you see the line of rocks/cobbles on top of the San Mateo Formation? These rocks are referred to as ‘undisturbed marine terrace deposits.‘

Through radioactive testing of these marine terrace deposits, geologists proved that these rocks had been here for over 120,000 years. Now the rule is, is if a fault has not been active for over 35,000 years, it is deemed inactive.

I find this fascinating.

To think these rocks have been sitting here, not moving at all, just sitting there for over 120,000 years!

I can not seem to wrap my head around this fact! Can you?

Below is a better view to give you an idea of what the area looks like. Do you see SONGS in the far background of the first photo?

Taking note of the first photo, you can see the breccia (see more below) right on the shoreline. If you look closely at the picture, the darker area points out where the high tide came onshore a few hours earlier.

I can not think of any other beach in San Diego where breccia is next to the water. 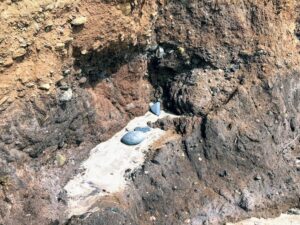 The most unusual formation is made up of Monterey Shale just east of the fault line. The Monterey Formation is an oil-rich, layered marine siltstone that is locally interbedded with volcanic ashes. Slumps and tilted beds are found all along the coast of Southern California.

The Monterey Formation is approximately 10 million years older than the San Mateo sandstone. It is believed that it was brought into contact here by the vertical movement of the Cristianitos fault.

Between 12 to 6 million years ago, fined grain sediments, which included microscopic plankton (diatoms), accumulated in water depths up to 1700 meters to form the Monterey Formation.

If you look closely, the delicate layers upon layers indicate low ‘bioturbation.’ In other words, it proves that nothing ‘alive’ disturbed the area, which suggests a lack of oxygen, thus making the Monterey Formation an excellent hydrocarbon source. This is why you see many offshore oil platforms off the coast of Los Angeles and Santa Barbara counties.

I took a few pieces of this formation, tiny pieces, and they have been sitting on my window-sill. The other day, I looked and was surprised that about 10 percent of it has already decomposed into a sand/clay substance just by sitting in the sun for a few weeks.

Suppose you would like a terrific explanation of how the Cristianitos Fault affected the Monterey Formation. In that case, I highly recommend you check out SOCALHiker.net, as he has a fantastic video explaining just this! 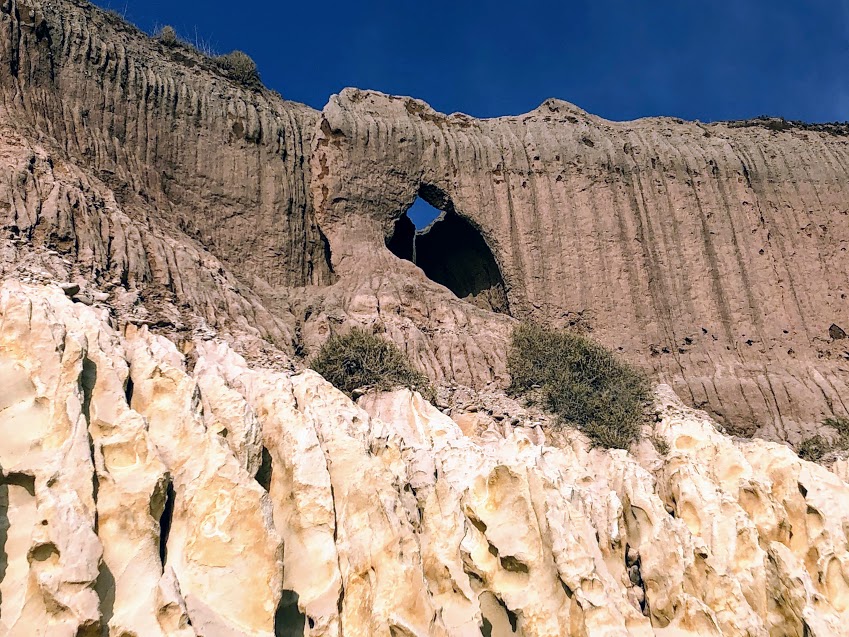 The first thing that catches my eye here at San Onofre State Beach is the rust-colored towering bluffs, otherwise known as the San Onofre Breccia.

Over 15 to 20 million years ago, several offshore islands were off the coast of California. The San Onofre Breccia is made up of sediments from these islands deposited here as tectonic forces tore California apart.

The breccia is a sedimentary rock composed of broken angular fragments (clasts) of minerals or rocks held together by a silt/clay matrix. The breccia’s clasts can vary, from tiny stones to enormous boulders as big as a bus.

Classic breccia may alone contain one type of mineral or several types. The San Onofre Breccia has various minerals and rocks present, and the group of stones called Catalina schist is the most notable.

Catalina schists are a mix of many types of metamorphic rocks, which include: blueschist, greenschist, amphibolite, soapstones, and many others. Please click on the link above if you want more information and a better explanation of how these rocks are unique. What caught my attention were the blueschist rocks. Previously, I have never seen a blue rock before.

Do you notice the fresh sand covering the Catalina schist rocks? Seeing the new sand piling underneath the sandstone San Mateo Formation was surreal.

Finishing Up at San Onofre State Beach- Trail One

So what do you think?

How cool is it to walk up to an earthquake fault line? Does it calm your nerves to know that the Cristianitos Fault is extinct? (Ironically, as I am posting this, we just had a 3.7 earthquake in Southern California last night.)

I can’t get enough of this beach! When standing upon the bluffs of San Onofre State Beach (see photo above), you are witnessing the last remains of classic mainland marine terraces in Southern California. That fact alone is why I love it over here so much.

2 Replies to “Checking Out the Cristianitos Fault”