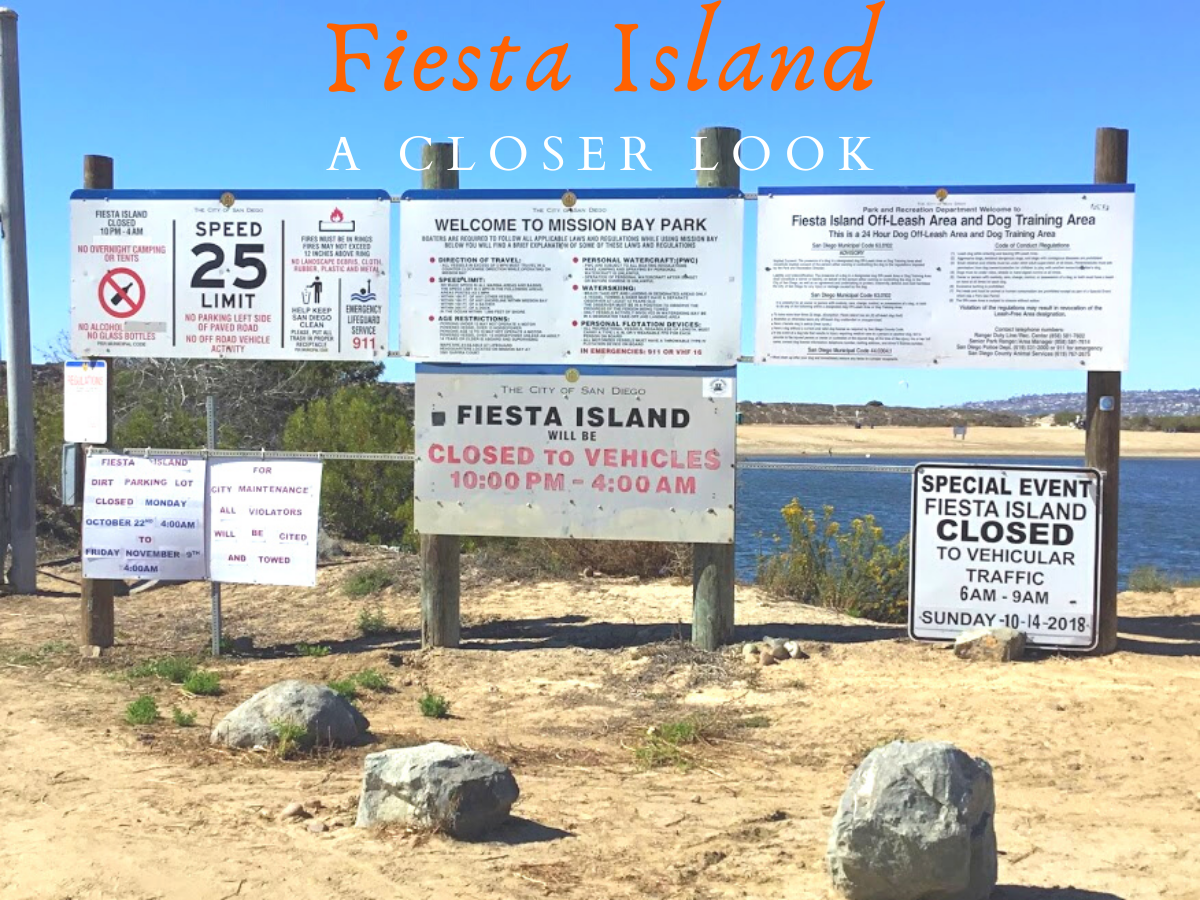 On June 15, 2021, one of my best friends and I took her two dogs to Fiesta Island at Mission Bay Park. Though I have been visiting Fiesta Island for over 30 years, today was the first time I entered the infamous leash-free dog park; this place is magical! Ironically, the next day, the California Coastal Commission formally decided that Fiesta Island Dog Park would stay the same way it had been for years- rustic and undeveloped. I had no idea this was up for a vote.

A bit more commentary on this subject later.

So as I said before, I have been coming here for years, but in 2018, I did a photo shoot of the island. I was surprised at how special it is over here. Would you care to see what I saw?

Let’s also take a closer look at all the things you can enjoy at Fiesta Island. As a bonus, I will be including phone numbers and links to relevant websites about this area! 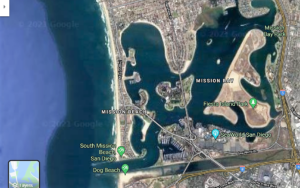 Click on the map below for a better idea.

#– Fiesta Island Dog Park is open 24 hours, seven days a week, but the island is closed to cars after 10:00 pm. You may enter, but you must park off the island and walk.

A Bit of Mission Bay History

Before I get to Fiesta Island, I must mention Mission Bay Park.

Mission Bay, referred to in the past as False Bay by the infamous Spanish explorer Juan Rodriquez Cabrillo in 1542, was once an extensive tidal marsh connected to the San Diego River.

The reference to False Bay was because, on average, the water level was relatively low and sometimes lacked water altogether.

But back in 1852, the United States Army created a dike on the south side of the river to prevent it from flowing back into San Diego Bay. You see, before this year, the river emptied into both False Bay and San Diego Bay.

Due to the placement of the dike, False Bay became an even bigger estuary. In the late 1880s, some development began but was ruined due to a massive storm that produced mass flooding.

In 1944, the San Diego Chamber of Commerce recommended developing the area into a tourist and recreational spot to help diversify the city’s economy. San Diego was and still is a big military town.

The constant dredging, moving, and filling of over 25 million cubic yards of sand created what is now known as Mission Bay Park.

Fiesta Island is a unique, primitive, and undeveloped peninsular island located in the southeastern section in the heart of Mission Bay Park. The entrance is found right near Tecolote Creek in East Mission Bay.

A one-way road circles the island’s circumference counterclockwise at a lovely speed of 25 mph. Usually, it is sparsely populated, with the most visitors being seen over at the world-famous dog park. No parking lots exist so that cars can drive onto the sandy beach and park. Most vehicles on the beach are there to launch personal watercraft, but you find some just sitting and enjoying the day.

How Big is Fiesta Island?

How Big is the Dog Park?

How Many People Visit Fiesta Island Each Year?

What Special Events Happen Over at Fiesta Island?

-Fiesta Island is the home of the first “Triathlon” swim/bike/run on September 25, 1974, which the San Diego Track Club directed.

How Special is the Fiesta Island Dog Park?

Are There Any Conservation Areas on Fiesta Island?

-both the north point and south point (Stoney Point) of the island are closed off to the public to protect California’s least tern nesting sites; and also, parts of the central island are off-limits as well

Ok, now that we have a bit of historical perspective out of the way and a few fun facts, let us now go and look around, shall we?

East Side of the Island- Calm Waters 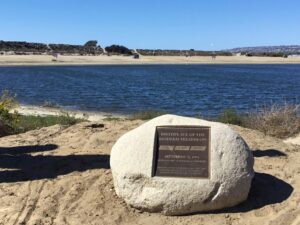 The entrance of Fiesta Island is found in the southwest corner of Mission Bay Park. There is a tiny parking area at the entrance, where you can find a row of Torrey pine trees.

As you pass over and onto Fiesta Island, looking to the right and left, the jet skies are flying around here. 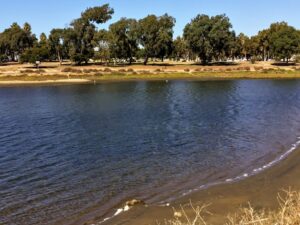 Tecolote Creek is found just north of the entrance of Fiesta Island. Here is a great area to check out shorebirds! Every time I am here, there are always birds.

Now we are on the island. Continuing north, we pass by Tecolote Cove, where you can ride on your watercraft (5mph). 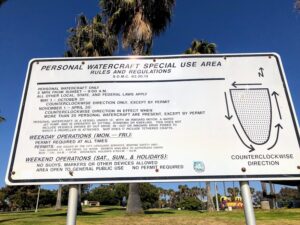 As we continue the journey heading north on the island, we come upon what is known as Enchanted Cove.

Enchanted Cove is located in the southeast corner of Fiesta Island. The speed limit here is five mph, so it is an excellent spot for stand-up paddleboarding (SUP) and rowing.

While I was here, several fishing poles were set up on both sides of the shorelines. I take that as a good sign that the potential for catching fish is high.

As we continue north, we come towards the Fiesta Island Youth Camp and Youth Aquatic Center. Here is where you can bypass the northern tip of the island, as you can follow the road to the left or continue straight (see map above.)

The seclusion of Enchanted Cove makes it also an excellent place for birdwatching. While there, several different shorebirds were wading on the waterline in search of food.

This area is not for public use but is utilized only by various San Diego Youth Groups, such as Boy Scouts, Girl Scouts, Boys & Girls Club, Seascouts, YMCA Indian Guides & Princess, and youth church groups. The children learn to sail, canoe, row, kayak, windsurfing, stand-up paddleboarding, and swim.

The campsite, adjacent to the Aquatic Center, can hold up to 250 campers in 25 camp clusters.

Here we are towards the island’s northern tip, where you cannot beach, launch, or anchor. But continuing to go around the end and down a bit more south, here is where many will launch their small personal watercraft into Fiesta Bay, where you can go more than five mph.

Also, it should be noted that the northern tip of Fiesta Island is off-limits and is enclosed for California’s least tern.

Center of the Island

Over the Line Fields

Here is the area where the infamous Over-The-Line Tournament takes place. The last tournament just took place this weekend (July 16-18.)

The rich history of this annual San Diego event began in the mid-50s, sponsored by the Old Mission Bay Athletic Club.

I found this excellent tribute video of the event.

Are you interested in participating in an Over-the-Line tournament?

Another little-known fact is that you can launch model rockets over here on the  Over-The-Line fields, but you will need to get a permit beforehand (see link below).

—>Permits for Private Use of Model Rockets<— 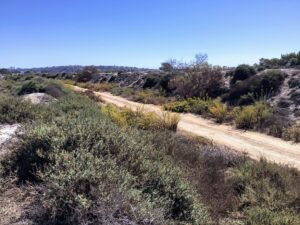 As we take a bit inland, you can look around at a few native and many non-native plants and a few animals if you are a bit lucky. Again, it is pretty refreshing walking around here, as most people prefer to stay by the water, and there is hardly anyone else around.

The West Side of Fiesta Island 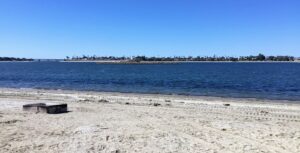 From the northern tip of Fiesta Island down to the southern end on the west side, you can go as fast as you like (within reason), from sunrise to sunset. So you can see countless personal watercraft mixed in with boats and sailboats. 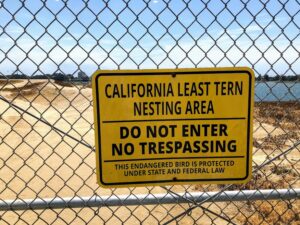 As we keep heading south around Fiesta Island, we come upon Stony Point, connected to the dog park. Due to the isolation of the area and a good food source, Stony Point is a favorable nesting site for the endangered California least tern. 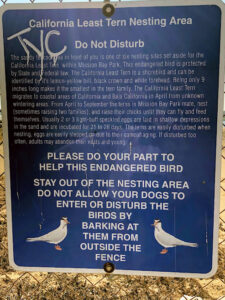 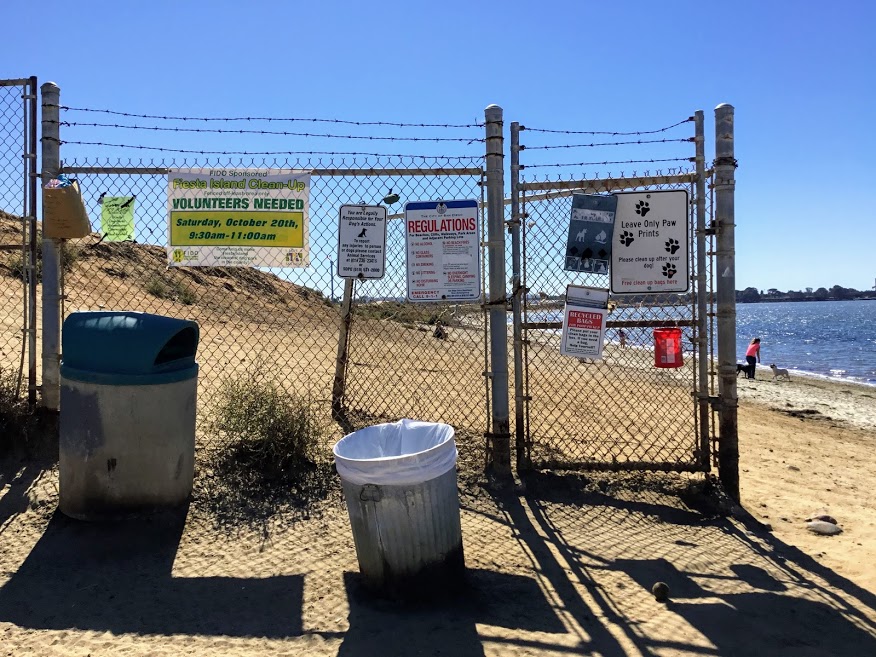 This area is truly magical in the southwestern section of the island. While researching, I came across a Yelp review stating that this dog park is the best in the world!

I am not sure about that, but it was voted the number one dog park in all of the United States but the readers of USA Today.

While walking the dog park with my friend and her dogs, I didn’t realize that the following day the city would decide to keep Fiesta Island the way it stands today.

The staff at the Coastal Commission wanted to breathe new life into a past proposal to open up broader public access to the island. They argued that the Coastal Act encourages opening waterfront areas to as many people as possible.

Below is a link to the proposed plan if you would like to look.

Several from the kayak and canoeing communities wanted to develop parts of the island that would allow shoreline access. This plan also included decreasing the size and entrance of the dog park. Opponents of the plan point out that there is already shoreline access across the way at South Shores Launch Ramp.

Fortunately, the proposal did not pass, and the Fiesta Island Dog Park remains just how it has always been.

For more in-depth information, click on the links below.

Hidden Anchorage is an isolated cove found on the island’s southeastern tip.

Here is the spot to go if you like to water ski!

A permit is needed before waterskiing (see the link below).

Because of this, I have found a few Waterskiing Clubs in San Diego to make the process easier for you.

Please see the information provided below.

End of the Tour!

So what do you think? Hopefully, I have included enough information that someday soon, you too will be able to experience Fiesta Island up close and personal.