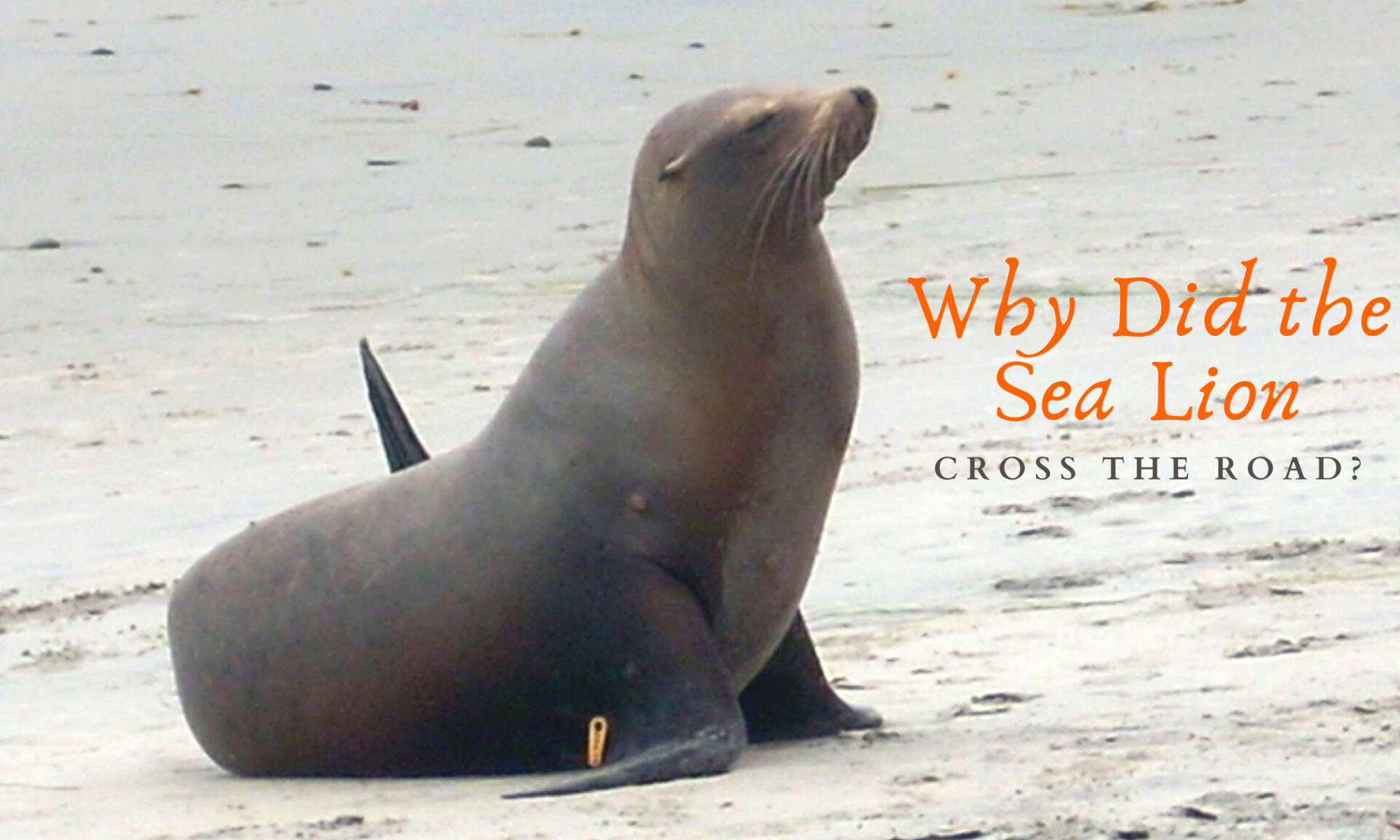 Have you heard the adage, “Why did the sea lion cross the road?” We can thank the Marco Polo California sea lion who took the world’s stage on January 7, for doing just that! Are you ok if I refer to him as Marco Polo? What makes it even more interesting is that this isn’t the first time this particular sea lion has been caught exploring the streets of San Diego!

So, where has he been? How do you think he got on the freeway?

Hopefully, I will answer all of these questions for you and more!

Yes! I have found several other examples of wandering sea lions in San Diego.

Let’s now look at where this sea lion has been seen in San Diego.

Hey, Is That a Sea Lion on the San Diego Freeway?

So on January 7, San Diego drivers on State Route 94 were in for a super surprise!

Josefine Jandinger was driving eastbound SR-94 just west of I-805 when she saw two people standing in the middle of the freeway, coaxing a 200-pound juvenile sea lion toward the median. She couldn’t believe what she was seeing. Josefine took the video down below.

Kudos to the couple who dared to exit their cars and help in any way possible. You are the true definition of heroes!

Why? That is the million-dollar question. By nature and design, California sea lions are curious creatures. Sea lions have proportionally larger foreflippers and stronger pectoral muscles, which allows them to be more agile in their movements on land. Not too many enjoy being around humans, though. Usually, they will flee if they smell humans.

Could this little guy here be an exception?

Did you know that this is the fifth time he has been caught wandering around urban San Diego in the past three months?

Please take a look at where he has been!

Where’s Waldo? Where Has He Been? 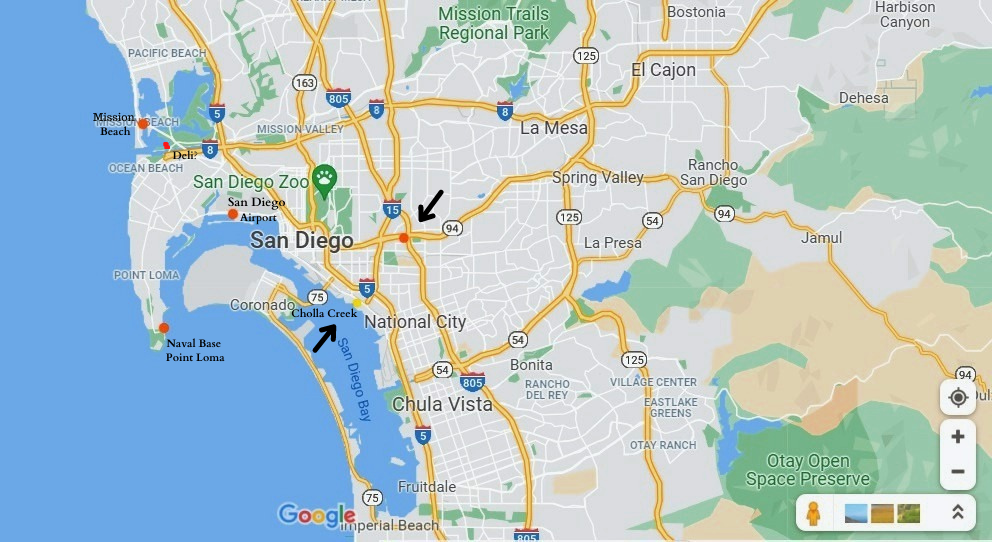 The first time was seen on Harbor Drive near the airport in November. SeaWorld came and picked him up, and he was later returned to the ocean after a week of rehabilitation.

In December, he was roaming the Mission Beach Boardwalk for the second time.

The third time he was witnessed was a couple of weeks later, over at a deli in Quivera Basin/Mission Bay. It is important to note that there is a bait barge in Quivera Basin, so there is that.

The only deli is located in the southwest corner when looking over Google Maps.

And finally, on January 6,  just one day before wandering onto the freeway, he was seen over near the entrance of San Diego Bay at Naval Base Point Loma for the fourth time.

(I have noted each location on the map above.)

So How Do They Think He Did It? Swimming up Chollas Creek?

So while reading over all the news articles and reviewing some of the comments, I think I have a good idea of how he got on the freeway.

He swam up a creek without a paddle.

Chollas Creek is a 30-mile-long urban creek that drains into San Diego Bay and begins in the Lemon Grove /La Mesa area. The creek’s mouth is located mid-San Diego Bay next to Naval Base San Diego Gate 9.   Most of the stream is armored or channelized.

Chollas Creek is one of San Diego’s most neglected waterways. There has been a long history of illegal pollution dumping, ultimately destroying the natural habitat.

Someone on Twitter mentioned the channelized section near Home Ave.

This section is about 1.5 miles south of where he was on the freeway. You would have to assume that there was at least a little water in this channel for him to have traveled so far inland, wouldn’t you?

We did get much rain a week before this incident.

Other Examples of Wandering San Diego Sea Lions Throughout the Years

May 20, 2019-Sea Lion Lies Down in Front of San Diego Hotel’s Sign, Refuses to Budge

April 10, 2015- A California sea lion pup wandered five blocks away from the beach and ended up at Mar Vista High School in Imperial Beach.

Personnel from the school ended up calling the San Diego Sheriff’s Department. Shortly after the Sherriff deputies came on the scene, they could detain the little guy in the back of the patrol squad car.

During a press release, they stated that he “clammed up” and “requested his lawyer.”

In 2015 California’s Central and Southern Coasts experienced an Unusual Mortality Event (UME) that caused juvenile California sea lions to strand themselves on the shoreline.

Altogether, the team at San Diego SeaWorld cared for an unprecedented total of 1446 animals, with 990 sea lions. It was an El Nino year in 2015, so food was scarce due to the water’s increased temperature.

This means that Mama sea lions had to go further out to sea to find food, which led to many sea lion pups being abandoned.

May 2, 2013 – Sea Lion Pup End Up in Imperial Beach Chamber of Commerce Office.

The sea lion pup walked about 150 yards from the shoreline and through an open office door at the Imperial Beach Chamber of Commerce building. An employee immediately called 911, and Animal Control came and took the baby to the SeaWorld Rehabilitation Center. It turned out that this little pup had just left the rehabilitation center.

A young sea lion pup wandered a few hundred yards from the beach, ending up on a front step of a private residence in the Roseland Drive area of La Jolla. Roseland Drive is found just above south La Jolla Shores Beach.

One witness explained that while fetching his newspaper, he noticed a bunch of crows going crazy. He saw a small sea lion pup in front of his neighbor’s house.

Whatever your opinion is of SeaWorld as a marine-themed park, you can not deny that they are excellent at marine mammal rescue operations.

Restoring health to stranded animals takes a great deal of time and endeavor.

It is also important to point out that SeaWorld covers all funding of its Animal Rescue and Rehabilitation Center.

How much does it cost annually?

More than 1 million dollars are needed annually, and all monies are covered exclusively by SeaWorld.

When Will He Leave Rehabilitation?

Before any animal is eligible to return to the wild, it must meet the criteria established by the National Marine Fisheries Service (NMFS) or the U.S. Fish and Wildlife Service (USFWS).

On January 11, authorities from SeaWorld reported that the little fella was doing just fine. SeaWorld officials tweeted that he had a complete veterinary exam after arriving at the park. They are communicating with NOAA (National Oceanic Atmospheric Administration) to return him to the ocean.

I could not leave before showing you a tagged California sea lion I witnessed on Moonlight Beach back in 2009.

If my memory serves me right, this guy refused to go back into the water, even when surrounded by people. I thought it odd at the time, but after much contemplation, I believe there must have been a shark out in the water; thus, he wanted nothing to do with the ocean.

I conclude because I have read several examples of sea lions doing just that (refusing to move) due to sharks being in the water. If you want to read some examples, please click on the San Diego Shark Sightings link below.

San Diego Sea Lion is Finally Returned to the Ocean!

So on February 11, after a month-long rehabilitation, the SeaWorld Rescue Team, along with veterinarians and NOAA, all decided that Marco Polo ( the beloved sea lion) fit all the above criteria to be released and successfully returned to the ocean.

I thought that I would mention that they believe

He Was Found One More Time in April!

So on April 7, SeaWorld was notified that our lovely little sea lion was again wandering around the Cholla’s Creek storm drain. With some coaxing, the rescue team could catch Marco Polo by offering him some fish.

They have reported that he is in perfect shape and estimate that he is about 10 to 13 years old and weighs approximately 188 pounds.

As an added precautionary method, Marco Polo now has two orange tags on his right flipper.

For now, he is back at SeaWorld and has been hanging out with three other sea lions, so they are wondering why he prefers to be a loner out in the wild.

I am excited to see where he will end up once he returns to the wild.