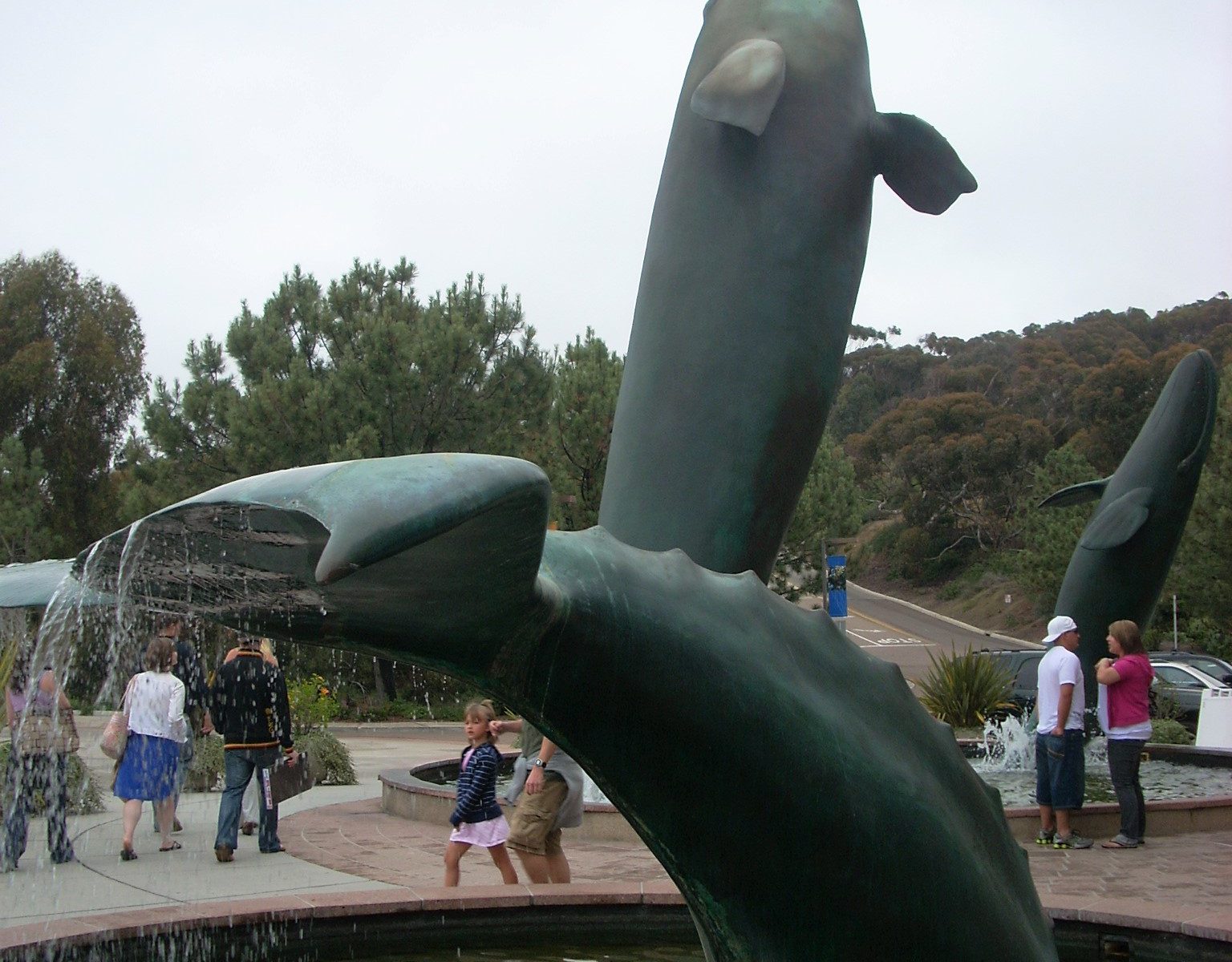 It is that time of year again! California’s official state marine mammal, the California Gray whale, is starting its way down South! Generally speaking, this is the best time for San Diego whale watching.

Whales pass through San Diego year-round but usually prefer to stay more than five miles offshore. On the other hand, Gray whales tend to keep close to the shore when traveling South; as a result, this is a great time to see them from onshore.

Let us now look at a few fascinating facts about the Gray whale; also, I have included a summary of some other possible whales you are most likely to encounter while on a San Diego whale watching tour.

Here is a video that I found that gives an excellent overview of the eastern North Pacific gray whale.

The North Pacific gray whales have two distinct isolated populations: the Eastern stock and the Western stock. Whales along the west coast of North America belong to the eastern North Pacific stock.

While on the other hand, whales located along the coast of eastern Asia belong to Western North Pacific, otherwise known as the “Korean” stock.

Every year, beginning in October to February, over 26,000 eastern North Pacific gray whales make their annual migration down the coast of North America.

The whales leave their summer feeding grounds in the Bering Sea and make way down South to the warm lagoons of Baja California (Mexico) to give birth to their calves.

Northern Migration of the Gray Whale

The whales start back North to their feeding grounds once again between January and June. Furthermore, the mothers and babies are the last to leave the lagoons, as the babies need to get all of their strength ready for the long journey back.

Because San Diego’s location is relatively close to their birthing grounds, you can expect to see both South and north migration until April. To clarify, when the whales are traveling north, they tend to stay 9 to 12 miles offshore, compared to less than 3 miles when going south.

Fun Fact-Upon further investigation, there is a resident population that remains off the coast of Canada down to California in the summer months and does not return to the Alaskan waters.

How Do Gray Whales Feed?

Gray whales are benthic bottom feeders with a unique way of feeding. The process begins with turning to the right side and opening their mouths.

The whales proceed to scoop up the sediment off the bottom, and in the final step, the baleen (a filter system in their mouths), at last, strains the sediment.

The Gray whale has over 300 plates of cream-colored baleen to help with this straining. This unique eating habit makes this whale dependent on the continental shelf and coastal waters.

What are those white patches all over their bodies?

Those are barnacles with lice attached and can weigh up to 400 pounds!

The barnacles are along for the ride, while the lice, on the other hand, are the actual parasite here as they can cause damage to the whale’s skin. (1)

As a remedy, the gray whales go to the bottom to scrape themselves against the rocks to get rid of these parasites.

Fun Fact- I was working out on a half-day fishing boat and noticed that there was this weird material in all the fishes mouths. I later found out from a deck hand, that what I was seeing was Gray whale dandruff!  Twenty years after and I still have it preserved in a baby food jar.

Gray Whales Have a Heart-Shaped Spout And a Dorsal Ridge

I find this feature alone makes the whale easier to spot when you are looking out onto the ocean from onshore.

Gray whales do not have a dorsal fin (2). Instead, their back has a low hump with 6 to 12 dorsal bumps (knuckles) on the midline of its rear section, leading down to its flukes; in other words,  a dorsal ridge.

Take a look at the photo above, and you can make out the baby’s dorsal ridge left of its Mother’s heart shape spout.

Several whales pass our shores throughout the year, including, but not limited to, the Blue, Fin, and Humpback whales.

The Blue whale is the most massive creature to have ever lived and can grow up to 85 feet (26 meters) long and weigh in at over 200 tons (181 metric tons.) They pass by San Diego from mid-June to September.

You can tell this whale apart from other whales by its flat U-shaped head and a noticeable ridge that goes from its blowhole to the top of the upper lip. It is also important to note that you can only see its dorsal fin when it is about to dive.

Did you know that a Blue Whale’s spout is over 30 feet tall? Because of this, you can see this spout from miles away.

Fun Fact- I had an extremely memorable moment where I witnessed over 10 Blue whales, less than half of a mile offshore of the La Jolla kelp beds. I was working on a 1/2 day fishing boat, when all of the sudden there were spouts everywhere!

As a result, I was running all around the boat in total awe, as several of them came extra close to the boat. It was unbelievable to see creatures as big as the 85-foot fishing vessel swimming so gracefully.  I will never forget that day!

Here is a short video that I took off the coast of Orange County on July 9, 2018.

The  Fin whale is the second-largest whale measuring up to 75 feet (23 meters) and weighing 80 tons (72 metric tons).

They look similar to a blue whale but more narrow with a prominent dorsal fin, long back, and a tall spout.

Fin whales are speedy swimmers, clocking in speeds of over 23 miles per hour. In fact, because of their speed, they have been described as the “greyhound of the sea.”

The Humpback whale can get up to 52 feet long (15.8 meters) and weigh up to 40 tons (36 metric tons). Long flippers and the knobs and nodules on their heads are distinct to Humpback whales.

You may witness this magnificent creature off the coast of San Diego from mid-June to September.

Whales are not the only thing to see on a San Diego whale-watching tour. Equally important, there are four different dolphins that you may witness.

Bottlenose dolphins live in all temperate and tropical waters worldwide. They are dark to light gray with a paler-colored belly. Their lengths reach between 8-12 feet (2.4-3.6 meters) and weigh up to 1430 pounds (648 kilograms).

There are two types of groups: offshore and coastal. The pelagic species of bottlenose dolphin are darker, more prominent, and have smaller pectoral fins than the coastal dolphins, which are lighter, smaller, and have larger pectoral fins.

The coastal bottlenose dolphins range from Southern California down to Chile.

It is not uncommon for bottlenose dolphins to enter San Diego Bay and Mission Bay or see them passing by at the beach from time to time.

The Common dolphin is gray with a white belly and distinctive tan and light gray markings. They are smaller, measuring between 7.5-8.5 feet (2.3-2.6 meters) and weighing up to 300 pounds (136 kilograms).

The long-beaked common dolphin is a species that live in the shallow, coastal waters of Southern California. Also, they are incredibly social and live in large pods (sometimes over 1000.)

Here is another short video that I took off the coast of Orange County, about 5 miles north of the San Diego County border of the short-beaked common dolphin.

The Pacific white-sided dolphin has three colors on its body: black, gray, and white, including a black ring around its eye. They also have a short break and a large hooked dorsal fin (bi-colored black and white).

The Pacific white-sided dolphin forms groups of 10 to a few hundred and, on rare occasions,  herds of thousands! Moreover, you may see them bow riding,   leaping, and doing acrobats, as well as forming groups with other groups of dolphins, along with baleen whales and California sea lions.

Risso’s dolphin is a gray and larger dolphin with white anchor-like marking on its side and stomach. They are between 10-12 feet (3-3.8 meters) and weigh between 650-1100 pounds (300-500 kilograms). The Risso’s dolphin has a round melon (forehead) with no beak.

There is noticeable scarring all over the body due not only to other Risso’s dolphins scratching their teeth on each other (raking) but also scars from their squid prey’s tentacles and beaks.

As a result, it is prevalent for older adults to be completely white because of this scaring.

These dolphins live in deeper, colder offshore water in groups of 3 to 30, yet sometimes rarely, they will form temporary crowds of several thousand.

Risso’s dolphins like to spy hop, breach and surf the stern waters of the boats. 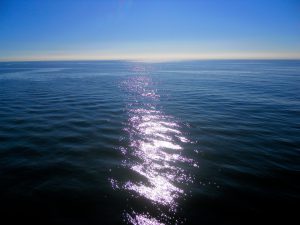 While in my last year of college, I volunteered with the National Fish and Wildlife Foundation. I was given the task of researching all of the marine mammals seen off the coast of San Diego.

Whale Watching in San Diego All Year Round 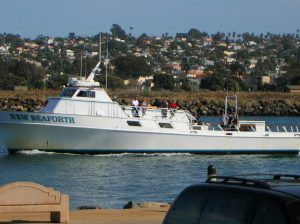 I hope you enjoyed learning a bit about what whales you may encounter while on a San Diego whale watching tour. As I pointed out before, there is a possibility to see whales year-round here.

Remember that the San Diego whale watching season gets popular when the Pacific gray whales are around.

With this in mind,  please check back later, as I will be posting all possible whale watching tours available here in San Diego, along with a few high spots on shore where you can watch these whales pass on land.

Thanks again, and please post any comments or questions you may have together with any San Diego whale watching photos; I would genuinely love to see them!

(1) Gray Whales Are More Heavily Infested With A Greater … (n.d.). Retrieved from https://www.learner.org/jnorth/tm/gwhale/Hitchhikers.html