Sunset Cliffs Natural Park is over 18 acres of cliffs adjacent to the Western coast of Point Loma, beginning at Ladera Street.

There is a sandy trail that runs parallel to Sunset Cliffs Boulevard that makes for a gorgeous walk.  Whenever we have company visiting from out of town and want to show off our coastline, this is where we go.

The Beauty and Wonder of Sunset Cliffs Natural Park

Above is a short video that showcases the beauty of the cliffs next to the water.

A Bit of Sunset Cliffs History

Through the centuries, the native American Kumeyaay Indians would travel seasonally here to fish and gather foodstuff from the intertidal pools and collect food from indigenous plants.

Upon further investigation, I also found another couple of exciting things!  First of all, in 1918, the sporting tycoon Albert Goodwin Spalding owned property right on the cliffs.

Spalding envisioned a place where people could appreciate the coast.  He invested 2 million dollars in bringing this dream to fruition.

He ultimately hired a Japanese architect to construct what was eventually named  “Sunset Cliff Park.” Take a look at this cutting-edge architecture!

I wish it were still around.

I love these old pictures! Here is what the site looks like today. If you look close enough, you will find anchors for the handrails still in place. I always wondered about that! 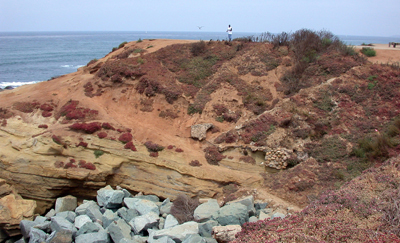 OK, I had no idea about this one, and I have been coming here for over 30 years. It seems that San Diego has its own “Goonies” cave right under our noses- the Rum Runners Cave.

The cave received its name because boats from Mexico would drop off rum barrels by use of block and tackle during the prohibition.

People would then took the delivered cargo through the tunnels to unknown places, but how did they do this?

When entering the cave, there is a spiral staircase leading to a tunnel with many twists and turns.

Old-timers still whisper that they believe that a tunnel led to a house right on the cliff.  Could this have been Spaulding’s house, maybe?  Hmmm?

This cave has been closed off for some time now, but that doesn’t seem to hinder people exploring.   So a word of caution, it is illegal, and you will get a ticket if found down there due to safety concerns.

There is another hidden sea cave half-mile south of the Rum Runner Cave. I can not believe that I have never heard of these caves before! 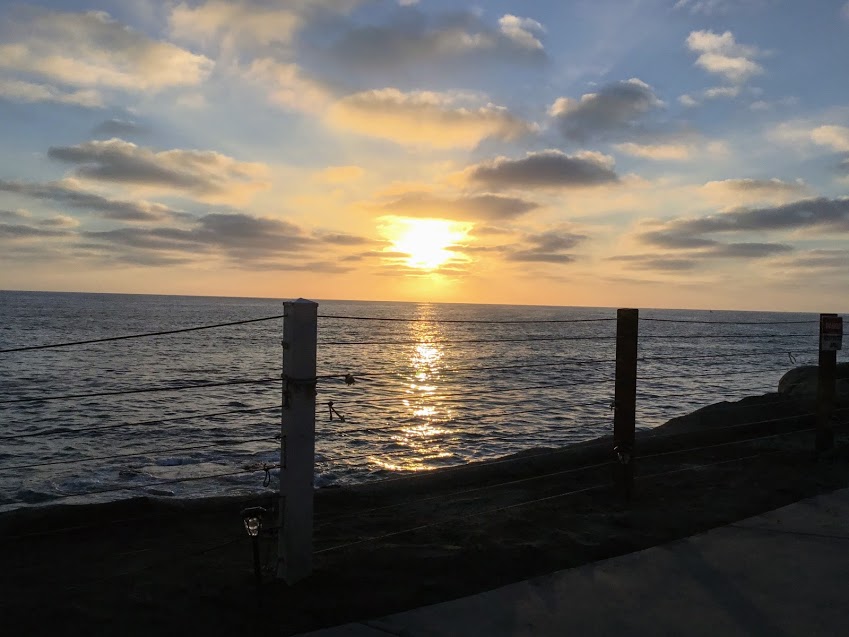 In my opinion, this is THE SPOT to watch a sunset. I remember taking my sister-in-law here when she was about 19. She told me that she had never seen an ocean sunset before. Blasphemy! I said to her that I knew just the right place and was up to the challenge.

Once we parked, she went off on her own, having a seat to watch the display. She sat there, patiently absorbing in all the wonder.

When she arrived back at the car, she was speechless.  On the way home, she couldn’t stop talking about how great it was. She ended up writing several poems about the event.

I, too, had an incredible incident when my son was just under two. We sat in the car facing the sea, looking for any Gray Whale spouts. Then suddenly, I saw two whale spouts on the horizon! I immediately took my son out of his car seat and got us out of the car as fast as possible.

Carrying him along the cliffs (near the street, not on edge), pointing as we went, he was excited, but not nearly as much as his momma! Looking back, I probably looked a fool, but I don’t care. I love this place.

Here is another example of one sunset taken on December 21, 2012, the day the world was supposed to end!

I hope you enjoyed yourself, and please feel free to leave any questions or comments!