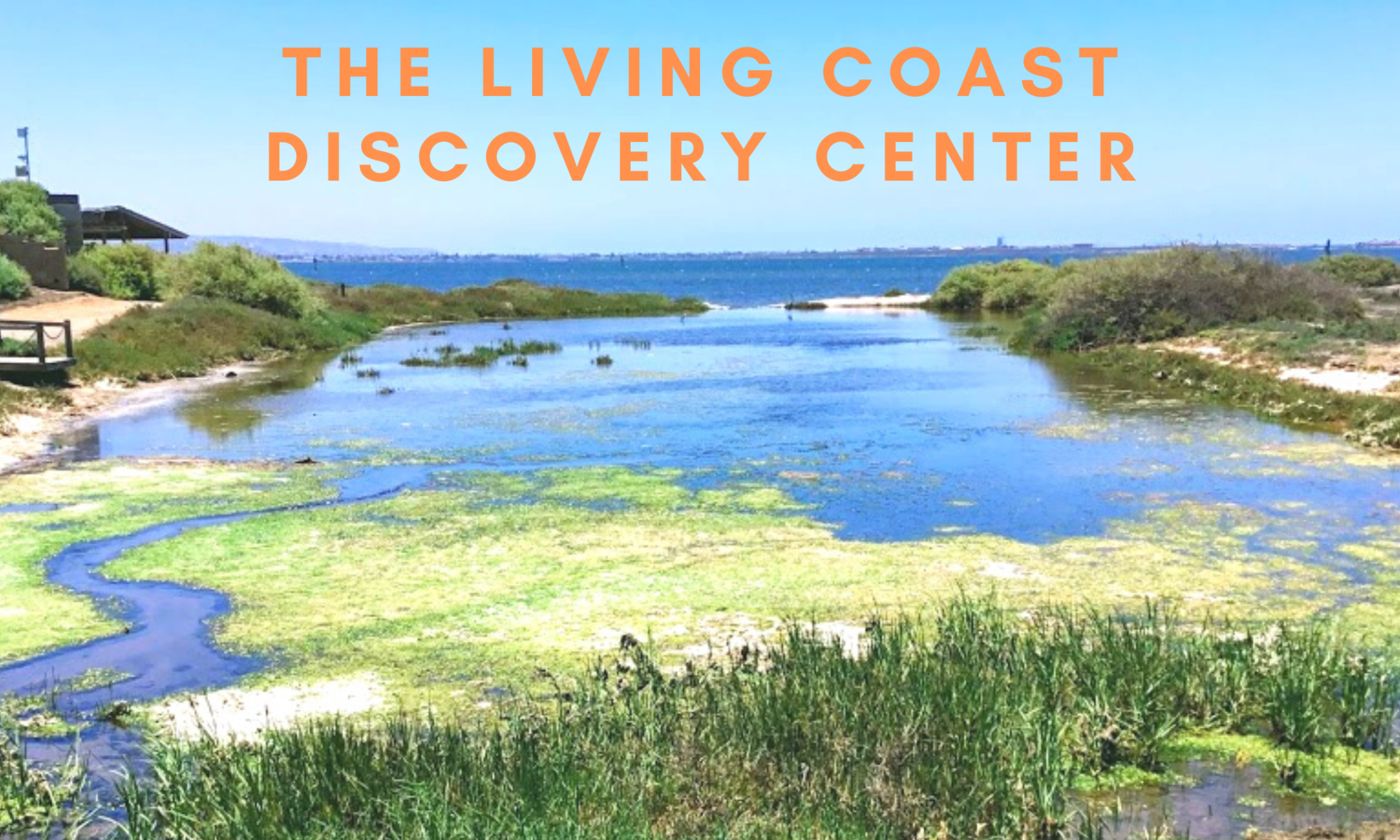 At the beginning of Summer, I took my two daughters to go and check out the Living Coast Discovery Center, located in the San Diego Bay National Wildlife Refuge. I had not been there for over 30 years, so needless to say, I was super excited to go back!

Where is the Living Coast Discovery Center? 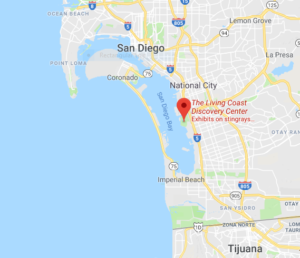 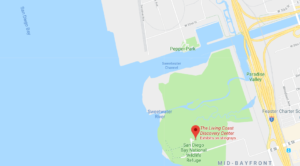 The San Diego Bay Wildlife Refuge comprises over 316 acres of salt marsh wetlands and coastal uplands surrounded by urban development. The Refuge, dedicated in 1999, has the primary objective of protecting the remaining salt marshes and mudflats in the south part of San Diego Bay.

Parking is available offsite, and a shuttle comes every 15 minutes to take patrons directly to the Living Coast Discovery Center.

The San Diego Bay National Wildlife Refuge is part of the Pacific Flyway-a central north-south flyway for migratory birds. San Diego Bay is a crucial resting spot where hundreds of thousands of birds stop to eat and rest while making their migration. Some species stay the whole winter while others stop for a few days.

Are you ready to see The Living Coast Discovery Center now? 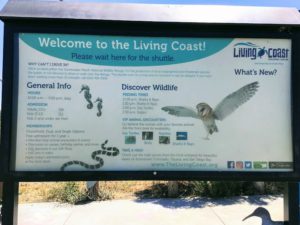 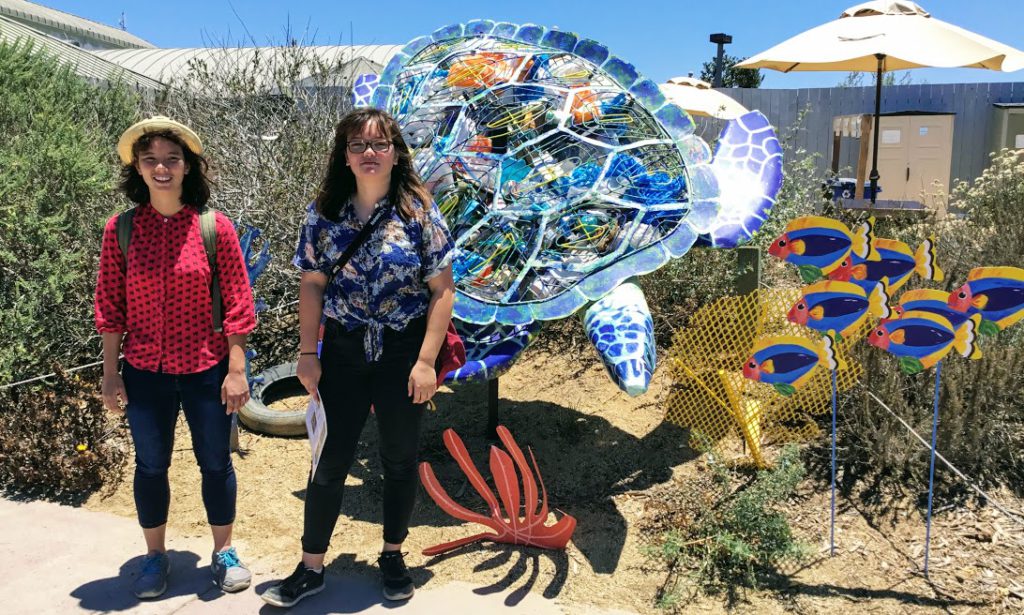 The shuttle lets us off right in front of the Living Coast Discovery Center and the Turtle Lagoon. Here you will see the eastern Pacific green sea turtle, native to the Southern California coastline, nests off Baja California, Mexico.

All sea turtles in U.S. waters are listed under the Endangered Species Act. Here at the center, you will learn how pollution affects the turtles and things that you, as an individual, can do to help, such as making sure your trash does not get into the ocean.

For instance, turtles and other marine animals often mistake plastic bags for jellyfish, so they ingest them. Because the plastic will not break down in their gut, it will cause a blockage, and they will eventually die from malnutrition. 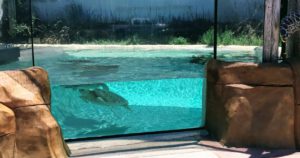 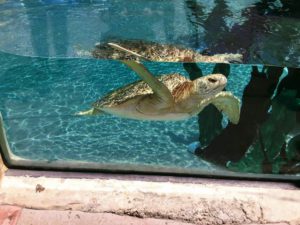 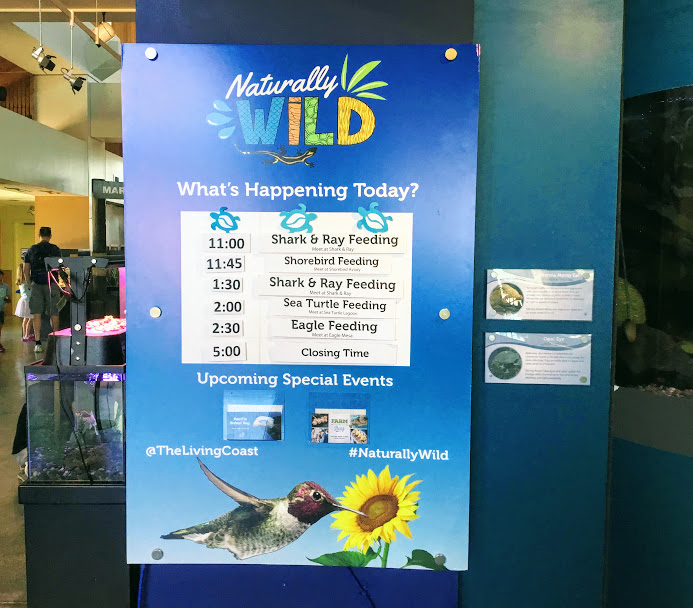 As you look at the photo above, you can see many opportunities to get up and close with the creatures here. How cool would it be to watch them feed the different animals? I wish that we stayed to watch the Eagles being fed. Maybe next time.

I love how they set up this place. Once entering, you will first encounter displays concentrating on the Bay, followed by the Marshlands, and finally, concluding with the information on the Uplands. 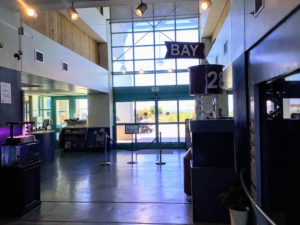 The Bay displays concentrate mainly on saltwater marine life. Here you will see examples of fish found in the Bay, jellyfish, moray eels, sea horses, and many more.

The Marsh is considered a transition zone between the uplands and the Bay. For example, the Marsh absorbs floodwaters, filters pollutants, and provides food and shelter for many species.

The tides affect the marshlands every day. Mudflats and tidal channels are exposed when the tide goes out. This exposure, in turn, provides food for shorebirds and other creatures. With the incoming tide, more food supplies enter the Marsh, replenishing any exposed invertebrate or plant.

Due to human development, many of these critical marshlands have disappeared. It is essential to preserve these wetlands for future generations, as they are vital to a healthy environment.

Protecting and restoring, and not to mention public involvement, are just a few of the main goals here at The Living Coast Discovery Center. 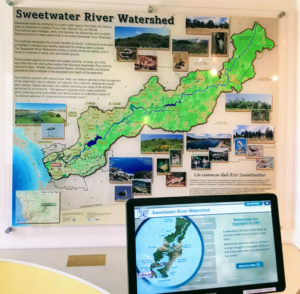 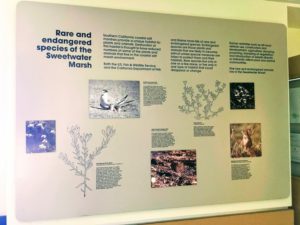 Let’s now head outside and go check out the sharks!

I have to say that this was one of our favorite exhibits! The tank is large, 22,000 gallons, with many sharks and rays to observe. I also appreciate how they incorporated several San Diego Bay fish inside the tank! 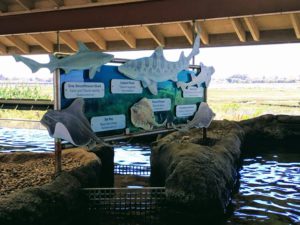 List of Sharks and Rays in San Diego Bay

After checking out the outdoor Shark and Ray Tank, we continue our exploration by looking at a few of the coastal salt marsh shorebirds found here in San Diego. 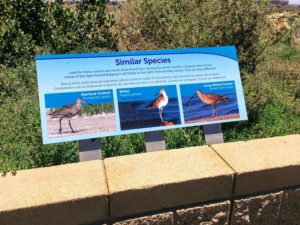 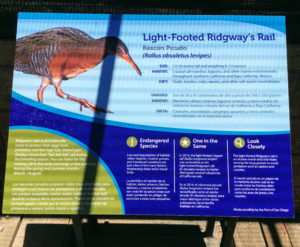 Here we have the elusive and endangered light-foot Ridgeway’s rail, which is only found in southern California and northern Baja California, Mexico.

This medium-sized salt marsh bird lives close to the water in the lower littoral zone (underwater except during a shallow tide), where eelgrass and cordgrass are most dense. They rely on this grass to build their nests. They also require shallow water, mudflats for foraging, and tall vegetation to hide when the tide is high.

Fun Fact- The Living Coast Discovery Center is the only zoological institution in the world that has the endangered light-footed Ridgeways’s rail species on public display. 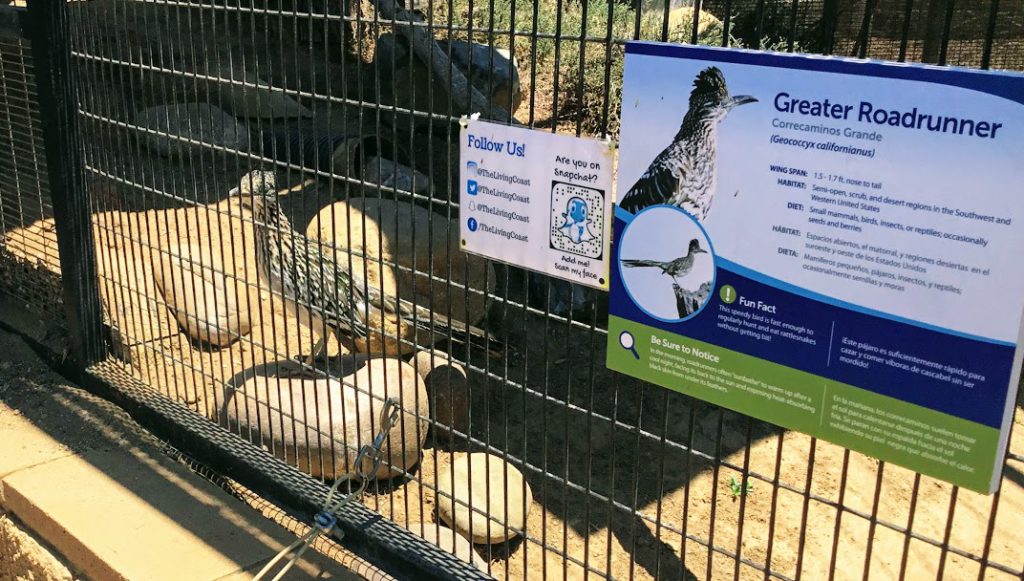 The Living Coast Discovery Center has one of the best varieties of raptors on display that I have ever seen outside of a public zoo. Here you can see several native birds of prey up close and personal. Once daily, you can also have the opportunity to watch as the keepers feed each bird individually.

My daughters and I were so excited to see a Bald Eagle and a Golden Eagle up close! 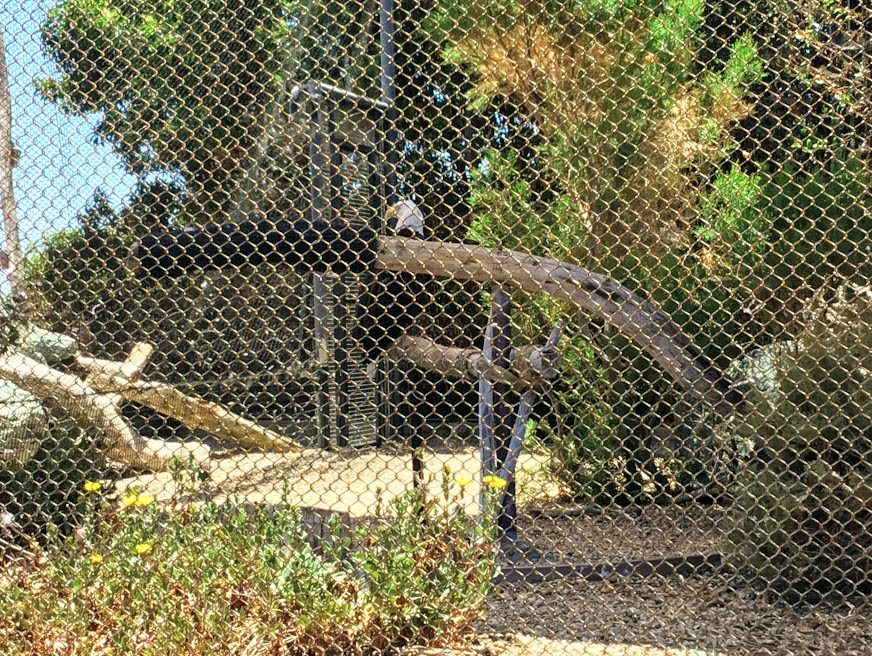 Here we have Franklin, the resident bald eagle who is also unable to be reintroduced back into the wild due to a wing injury.

How about a few interesting Bald Eagle facts?

Did you know that a bald eagle’s internal temperature is 106 degrees Fahrenheit?

Or that the average lifespan is 20 years?

There was a captive bald eagle in West Stephentown, NY, that lived to be 48 years old!

Did you realize that the scientific name Haliaeetus leucocephalus means “white-headed sea eagle?”

Here we have Dorado, a Golden Eagle. His right wing was damaged when he was hit by a car, so he can’t be reintroduced back into the wild. I sure had fun watching him rock back and forth on this swing.

Golden Eagles are the largest bird of prey in North America. Did you know that golden eagles hunt large mammals and even fight off coyotes and bears when guarding their prey? 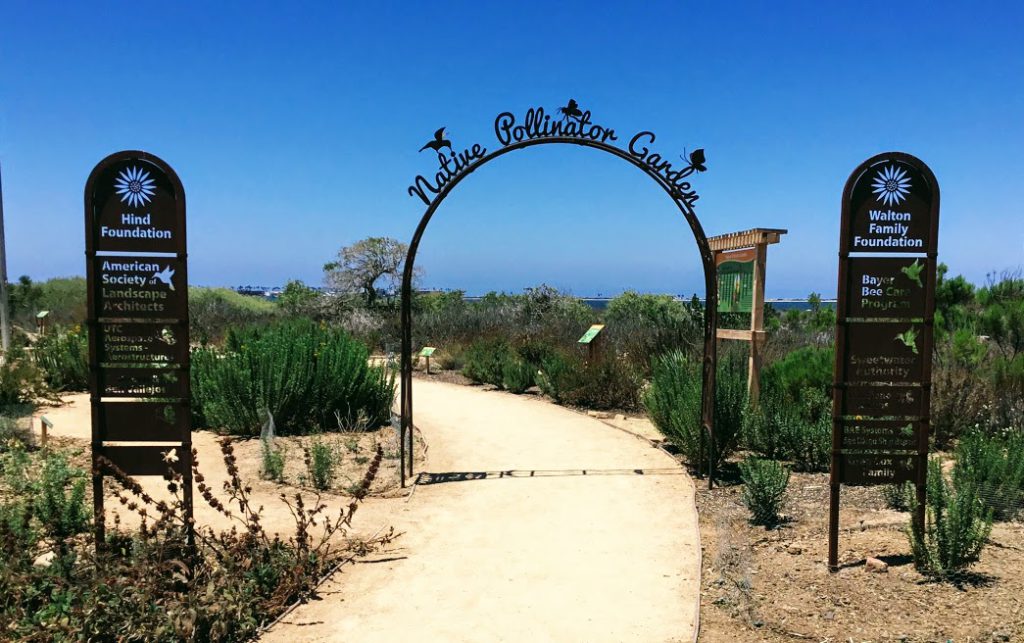 We are now back in front of The Living Coast Discovery Center to check out the newest exhibit- The Native Pollinator Garden.

Here you will find several native plant species and suggestions for native southern California landscaping. As you are probably aware, San Diego does not get much rain, so drought-tolerant plants survive here the best.

We could not use sprinklers at our home very long ago due to an emergency drought ban. Even though the ban was lifted in August of 2017, water conservation is still encouraged.

It is just the way of life here for all of us that live in Southern California. Water is our most precious commodity. 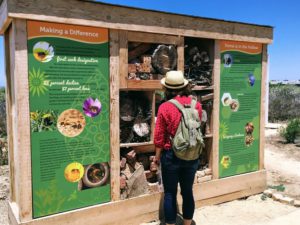 This exhibit above has several different spots for bees to nest in. There is also information on other natural pollinators that live in the salt marsh, such as hummingbirds and butterflies. Each species has its role when it comes to the biodiversity of the habitat.

The primary goal of this exhibit is to increase awareness and educate future generations on the importance of bees, butterflies, and hummingbirds to the coastal environment and all habitats.

Walking the Trails of the Living Coast Discovery Center

Now we come to my favorite part, walking the trails! I encourage you to visit all the exhibits before setting off, as you will learn vital information that will help you enjoy yourself even more. 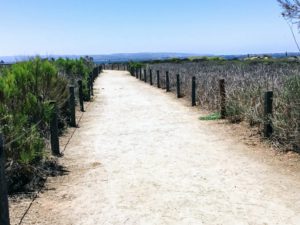 We started our adventure by walking straight and making the first left. We eventually ended up at this small pool of water, which had a small deck and an observation hut just to the left. Let’s check it out, shall we? 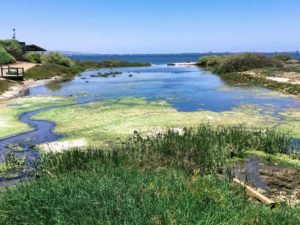 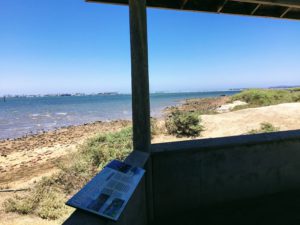 Inside the bird observation, the hut is a beautiful location that allows you a 270-degree view of San Diego Bay. What a great place to set up for a few hours with your binoculars and camera! 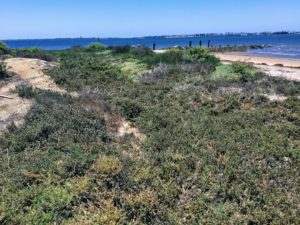 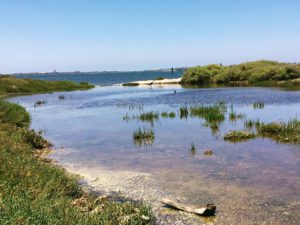 Now let’s go and walk back toward the middle of Sweetwater Marsh and see what we can see.

The History of Gunpowder Point 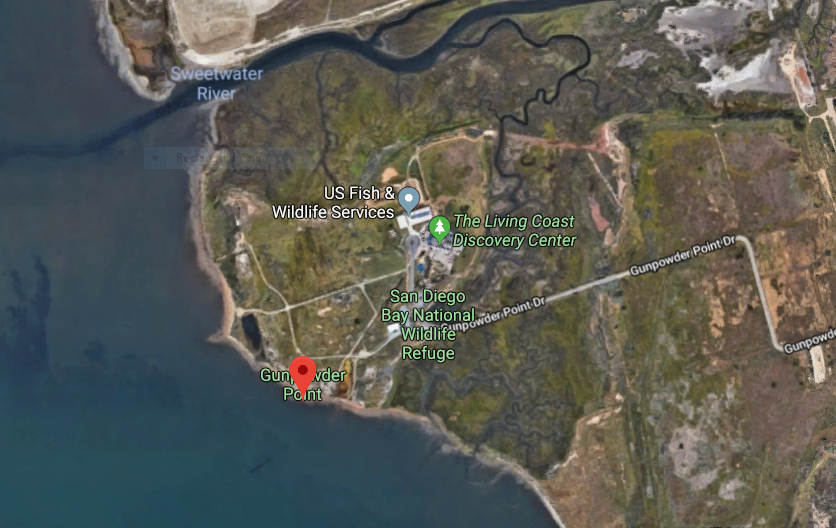 Gunpowder Point is where The Living Coast Discovery Center is located at the Sweetwater Marsh.

In 1916, this was the site of kelp extracting company Hercules Co., which made smokeless gunpowder called cordite for the British Troops in WWI.

From 1916-1919 over 1000 employees were making this gunpowder around the clock. Upon further research, I found out that each employee received an honorable war medal from the U.S. Government to commemorate all they did to help win the war.

In 1920, a Cottonseed Oil Company bought the abandoned Hercules building to store its oil. Unfortunately, in 1929 the entire building burned down in a fire. I love finding all of this stuff out; it makes these discoveries sweeter!

Here is the site of one of the old storage tanks surrounded by sage plants. Down below is another piece of history from Gunpowder Point. 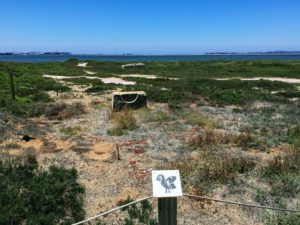 Fun Fact-Have you ever heard of the film “Attack of the Killer Tomatoes?’ The movie was filmed here at Gunpowder Point in 1978.

So what did you think? Did you learn anything new? I sure hope so! Thank you so much for joining me on our mini-adventure. I highly recommend visiting here. I can not wait to come back in the winter to do some serious bird watching.

Please check out the above link to The Living Coast Discovery Center, as there is some fascinating information on their website.

Please feel free to leave any questions or comments down below!