I am ashamed to admit, that even though I have been living in the San Diego area for over 30 years, I have never heard of, much less been on, the La Jolla Coast Walk Trail.

Do not get me wrong, because I have been up and down the coast of La Jolla (pronounced La Hoya) more times than I can count. It is one of my most revered areas in San Diego hands down.  So when I came across this hiking trail while researching, I knew that I must go! Would you like to join me on a tour of the La Jolla Coast Trail?

Before we start our tour, I would like to mention that I have written extensively about walking the La Jolla coastline in a previous post- Let’s Take a La Jolla Coast Walk.

But to be fair, that post only concentrated on the area just west of Downtown La Jolla and ended at The Cave Store. Today I would like to continue the hike, by following the path past The Cave Store and walking on the official La Jolla Coast Walk Trail. Confusing? Well, I sure hope not after you finish reading this!

Discovering the La Jolla Coast Trail For the First Time

On a mild November day, my girls and I set off from our home to travel south down the coast to visit La Jolla, one of our favorite places to be.

What made our La Jolla experience even better, was the fact that we also got to experience a negative tide.

What Is So Great About a Negative Tide?

When the tide is negative, a good significant portion of the shoreline is exposed, which gives you an excellent vantage point to see what is usually covered with water.

To someone who is smitten with everything there is to do with the Ocean environment, these are stellar days!

Where is the La Jolla Coast Walk Trail?

As you can see from the map above, the La Jolla Coast Walk Trail is relatively short (.4 miles) and is located on the bluffs behind many homes.  Due to this fact, there is not much parking available. So, keeping this in mind, I will be linking The Cave Store’s address so you will be able to get an idea about where this trail starts.

Goldfish Point is located right behind The Cave Store, in the northern section of Downtown La Jolla as well as just south of the beginning of the La Jolla Coast Walk Trail.

Usually, Goldfish Point was the spot where we would stop our La Jolla stroll, but today we went out onto the Point to observe all of the shorebirds roosting on the side of the bluffs. It was fantastic! It felt like I was in the middle of a wildlife documentary.

I was wondering why this area was named Goldfish Point. I think my daughters might have figured this out! You see, when standing on the bluffs looking down into the water, you can see the California state marine fish, the Garibaldi which happens to be orange. And when I say ‘clearly see,’ I mean if you have good eyes, because I couldn’t see them myself, but my girls sure did.

The ‘Official’ Start of the La Jolla Coast Walk Trail 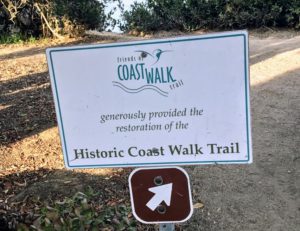 The La Jolla Coast Walk Trail was initially created in 1932 and was given historical significance in 1990.

Did you know that this trail is believed to have been a Native American hunting trail, dating back over 9500 years ago?

Archeologists have found evidence of late prehistoric Indian village artifacts around this location.  That puts some perspective on the area, doesn’t it?

The Beginning of the Trail

Here we are at the beginning of the trail, looking back towards Goldfish Point.

Once we go around the first corner on the trail, we come upon Caves Beach, and boy was I excited! You see early on when I first started this website I created a post which lists all of the beaches of San Diego County, and Caves Beach was one of the only beaches that I had never seen. As you can see, it is pretty isolated. The only way to get here is by kayak or paddleboard, that is unless the tide is extremely low, which only happens about twice a year.

Continuing On the Trail

Located on the edge of the bluff I spied this big and beautiful castor bean plant. Native to tropical East Africa around Ethiopia, did you happen to know that this plant is extremely toxic and is considered a weed here in Southern California? I have to say that this was the first time that I have seen this plant in full bloom. Isn’t stunning?

Here we are now looking down unto La Jolla Bay, part of the La Jolla Underwater Ecological Reserve which spans over 6000 acres. The Reserve’s boundaries start mid-way at La Jolla Shores Beach and end at the southern section of the La Jolla Cove. 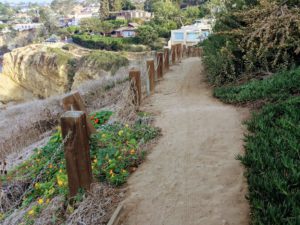 As we continue on our way, we are never bored with the scenery. There are so many things to see, hear and smell while on our journey and I only wish you could be experiencing them as well.

Imagine a light breeze, waves slowly making there way in and crashing lightly on the rocks and all awhile gulls are heard screaming in the distance. All in all, a gorgeous Southern California day.

Did you happen to know that Dr. Seuss (Theodor Seuss Geisel) lived in La Jolla? His house is up on Mt Soledad, which is about 2 miles east of the La Jolla Coast Walk Trail.

After a bit of research, I found out that so much of his work was inspired by La Jolla. For instance, do you remember our state fish, the Garibaldi? Well, that fish inspired the story One Fish, Two Fish, Red Fish, Blue Fish? You see, the Garibaldi is a very anxious and aggressive fish, just like the main character in the book.

Here is one more exciting fact concerning Dr. Seuss’s La Jolla connection. In the photo above is a Monterey cypress tree which is found in the Ellen Browning Scripps Park. This particular tree was the inspiration for the Truffula trees in the children’s storybook, The Lorax.

I have been taking pictures of the tree for over thirty years. It stands out if you know what I mean. ( Update- I am sad to report that this particular tree fell over June 2019 and is no longer there) 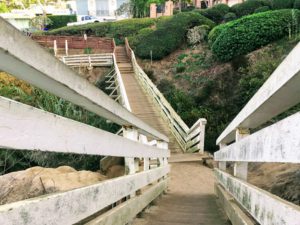 Here we have Devil’s Slide Footbridge which was initially constructed in 1931, and again in 1991. An interesting fact, in the late 1880s, many would try to descend, by way of a rope, to reach the bottom in search of abalone or to go to the caves.

It is believed that it was named Devil’s Slide because of how steep it is as well as being prone to rock slides. Needless to say, it was not a safe way at all, and many were hurt in the pursuit.

I didn’t see it myself, but there is supposed to still be an anchor with a rope tied to it here by the bridge; actual remnants from over 130 years! I sure wish I would have seen it, but maybe next time.

I wished that I would have done a little more research on Devil’s Slide before heading here because I would have appreciated this section of the trail much more if I had.

Located right underneath the La Jolla Coast Walk Trail’s bridge,  is an earthquake fault line- The Rose Canyon Fault. If you take a good look at the photo above, you will see that the palm trees are falling off of the bluff. It is as if the tree trunks are growing almost parallel to the ground below!

End of the Trail

I was extremely excited to come to the end of the trail and was able to get this incredible panoramic photo of La Jolla Cave’s Beach. Do you see La Jolla Shores Beach as well as Torrey Pines State Beach in the far background?

Do you also notice how calm La Jolla Bay is?  There is a very deep offshore trench here, known as the La Jolla Submarine Canyon, which helps keep the waters here relatively calm.

The trench comes right up to the beach  around here as well as at La Jolla Shores Beach  (see photo below.)

The deep trenches slow the currents down making La Jolla Bay an ideal spot for kayaking, as well as paddleboarding.

At the end of the trail is an excellent place to sit and enjoy the scenery of the La Jolla Caves. Do you happen to notice the kayaks bunched up in front of the caves? They are getting ready to go inside.

Another fascinating thing to look out for is all of the seabirds that visit this location. If you happen to peak over the bluffs, I bet that you will see some roosting birds.

I also wanted to add that this spot would give you an excellent vantage point to look for Gray whales when they pass by close to shore in November-January during their southerly winter migration down to Baja California.

The Seven Caves of La Jolla 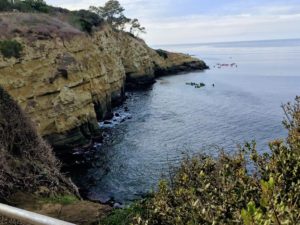 Are you curious about the seven caves in La Jolla?

Here is a list of the names, starting from the east.

I can not wait to come back here on another negative tide to see these caves up close and personal. To reach this beach, you would have to start over at La Jolla Shores Beach, and it would be about a mile away. I suppose it is a bit unrealistic to go by land, because of the seclusion of the area.

You would only be able to come here by walking when the tide is extremely low, and this happens during the day about once a year on a King Tide in January. Honestly, going by water is the safest way to see the caves.   There are many La Jolla Sea Cave Tours available, so maybe next time I will be on a kayak!

End of the Tour 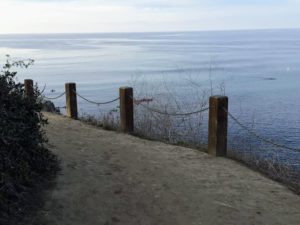 So what do you think? Pretty incredible, yes? All in all, I would have to say that this relatively easy hike is one of the best in all of San Diego.

When my girls and I were visiting, we hardly saw anyone on the trail. You would think that it would be busier than it was, but again, I did not know about this site for over 30 years, so I can not fault all of the other San Diego natives that are unaware of the historical La Jolla Coast Walk Trail.

So now you know, will you share this information with others? I sure hope so!

If you have any questions or comments, please feel free to leave them below. Thank you once again for visiting! 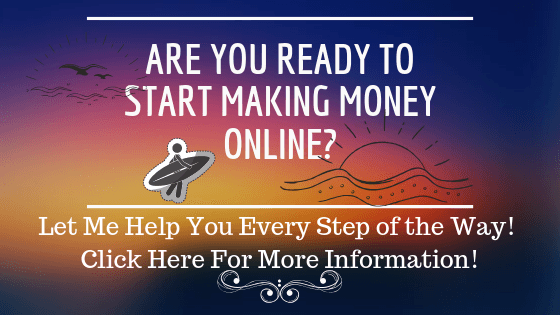