This past year, I have been having a blast visiting all of the San Diego Lagoons and Nature Centers, and this was the last lagoon to see on my list. 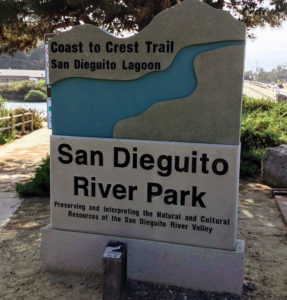 Walking the Coast to Crest Trail at the San Dieguito Lagoon

The San Dieguito Lagoon is located in North County, San Diego, 21 miles north of Downtown San Diego. The lagoon is part of the San Dieguito River Park, which spans over 92,000 acres!

Located within this park is a walking trail that stretches from the Volcan Mountains near Julian to the coast of Del Mar, otherwise known as the Coast to Crest Trail. 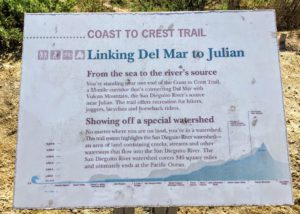 At the time of this writing, 45 miles of the Trail have been created, but eventually, it will measure 70 miles.

There is something special about this Trail that I would like to mention. Located sporadically along the path are QR (quick response) codes, which allow you to have an interpretive hike when using your phone. 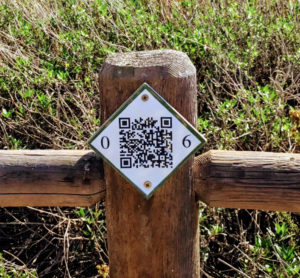 Or I have also found the pamphlet provided at the Trailhead’s kiosk, so click on the underlined link above if you would like to look at it. I highly recommend it!

Come and join me as I explore the final 2 miles of the Coast to Crest Trail. But we will not end there because directly across the street from where the Trail ends, you will find the River Path Del Mar Trail (.5 miles), which takes you now to Del Mar North Beach.

Where is the San Dieguito River Park?

Today I decided to start my adventure close to the San Dieguito River Park (click on the link to get directions.) In essence, the parking area is a small street located behind the Del Mar Shopping Center.

The last couple of miles of the Coast to Crest Trail are straightforward and not strenuous at all, and the Trail is level and very easy to navigate.

Dogs are welcome to accompany you as long as they are on a leash. Also, horseback riding is permitted, so be aware of where you step!

I was excited to experience the Coast to Crest Trail for the first time on a crisp November day. There is so much to take in!

Ready to check out what I saw?

At the beginning of the Trail, I found this informative sign pointing out all the restorations done here.

Did you know that the San Dieguito watershed is the largest in San Diego County? Remember, the river itself is 23.8 miles long!

It has been a goal of the cities of Del Mar and San Diego to restore this coastal watershed without infringing on the rights of private property owners.

The project began in 2006 and was eventually completed in 2011. The primary goals of the project included: opening up the river’s inlet channel to improve water circulation, constructing bird nesting sites, improving slope drainage, and improving beach access.

As we begin our journey, I am pleased to see that benches are available along the Trail where you can rest and watch for birds. 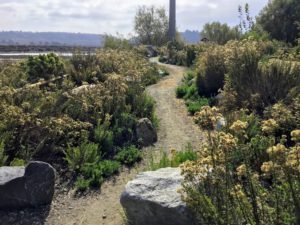 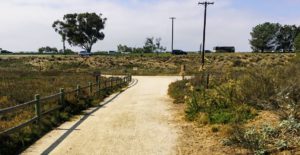 As we continue, here is where horses are no longer allowed on the Trail. Let’s keep going as we veer to the left. 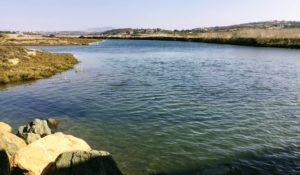 Here is a great spot to watch for mullets jumping out of the water. Do you notice how deep the water is? 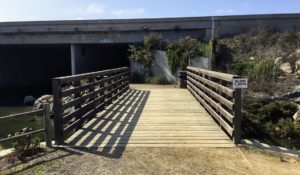 We are now at the spot where you walk underneath Interstate 5 and enter the southern portion of the San Dieguito Lagoon. Even though it can be pretty loud here, it does not seem to bother the birds in the least due to the traffic.

As I walked the Coast to Crest Trail, I enjoyed checking out all the native plants, especially the coastal salt marsh plants such as pickleweed (Salicornia pacifica) and saltgrass (Distichlis spicata.) Whenever you see these plants, you can bet that the water in the area is not entirely freshwater but is more influenced by the saltwater from the Ocean.

As you may notice in the photo above, pickleweed (also known as glasswort) turns more red than green in autumn, giving Southern California a bit of autumnal color in the coastal wetlands.

A fun fact about saltgrass is that it excretes salt. So the next time you see any, try rubbing your fingers on the grass, and you will be able to feel the salt.

Coastal goldenbush (Isocoma menziesii) is in the daisy family and is very prominent on the coast of San Diego. What I find so fascinating about this plant is that it can grow up to 7 feet high and be able to grow in sand.

Next, we have the cholla cactus (Cylindropuntia fulgida), often referred to as the jumping cactus because the segments on the plant are not firmly attached. So, for instance,  if you were to brush the plant while walking by lightly, it will stick to you as if it jumped onto you!

My daughter bumped into one once, and let me tell you; it is challenging to extract the needles from your skin. Be careful and stay as far away from them as possible!

Another native species that is extremely important is the California buckwheat (Eriogonum fasciculatum.)  Native Americans would use this plant as a food source and a medicinal plant to treat wounds, headaches, and diarrhea.

California buckwheat is also the most critical native source of honey in California.

Here we have another widespread Southern California native plant, the coyote bush (Baccharis pilularis.), also belongs to the daisy family. Their blooming season is very long, as it lasts from August to December. An essential feature of this plant is that it is highly drought-resistant and fire-resistant. In fact, after a fire, this is the first plant that will colonize an area and will, in turn, dominate the area until trees start growing. Once trees are established, the number of coyote bushes begins to diminish as they do not do good in shady conditions.

Let us now look at a few birds you may see off the Coast to Crest Trail, shall we?

Almost immediately after going through the tunnel, I noticed a great egret on the lagoon’s edge. 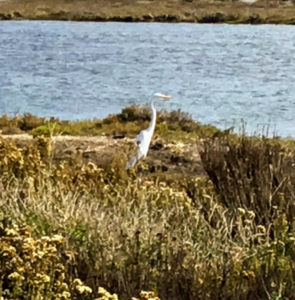 The great egret (Ardea alba), also known as the great white heron, is extremely large, with a wingspan between 4.3 to 5.6 feet long.

Not much of a fun fact, but many great egrets were killed at the end of the 19th century, so their plumes (feathers) could be used in hats.

These birds are not very vocal unless disturbed and live in tall trees close to the water in colonies.

When I saw this long-billed curlew (Numenius americanus), I was extremely excited because it was the first time I had seen one in the wild. The long-billed curlew is the largest sandpiper in North America and has the longest bill of any other shorebird.

The San Dieguito Lagoon sees over 180 species of birds visiting this area via the Pacific Flyway every winter, making it one of the favorite places to go bird watching. There are free birding expeditions held here periodically.

After some research on the website e-Bird.org, the best places to look for birds are the Northeast and the Southwest portions of the lagoon. If interested, check out the website, which lists up-to-date bird sightings in both areas.

I have written extensively in a previous post regarding the Best San Diego Birding Hotspots; please click on the link above if you would like more information. 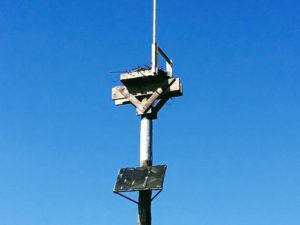 As we continue on the Coast to Crest Trail, we come upon the Del Mar Fairgrounds and the Del Mar Racetrack. Located right near the lagoon’s edge, they have erected two osprey nesting boxes that have been a great success. The osprey, known as the sea hawk, is a large raptor who eats fish almost exclusively. 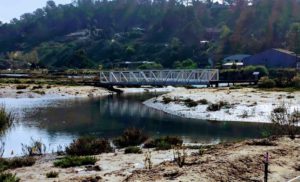 In the southwest corner of the lagoon, this planked platform allows for a unique experience of going out onto the lagoon.

Depending on the tides, here, too, is a great place to watch birds eating on the mudflats and foraging in the water. 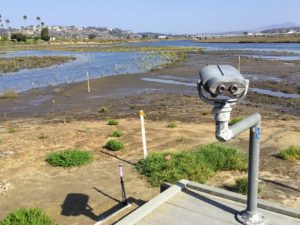 At the very end of the platform, you will find a set of stationary binoculars, which are perfect if you would like to look at the Osprey nesting boxes. They are just across the lagoon from here.

Looking closely at the photo above, you can distinguish two man-made islands. These islands were constructed as nesting sites for the endangered snowy plover California least tern and the Ridgeway’s rail.

Across the street (Jimmy Durante Blvd), we now come upon the River Path Del Mar, a short .5-mile trail that will take you the rest of the way to the coast. 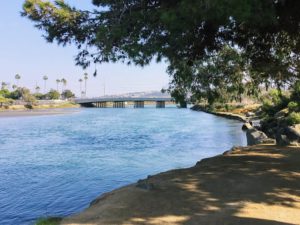 There are several benches off this Trail — a great place to sit and pass the time. 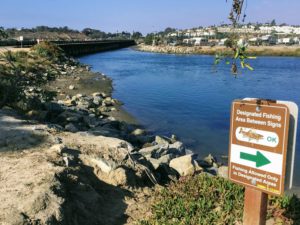 Here we come upon the area, just east of the railroad tracks, where you can fish. 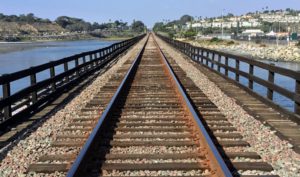 Once crossing the railroad tracks, the San Dieguito Lagoon opens up, and you can see the inlet going out onto the beach.

So we are almost to the beach at this point, with just about .25 miles to go. Once at the Trail’s end, you must cross the street (Camino Del Mar) and be on the coast. 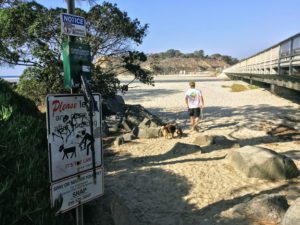 As you can see by the photo above, dogs are welcomed here. Del Mar North Beach is also referred to as Del Mar Dog Beach, and the beaches of Del Mar are very dog-friendly.

All San Diego beaches are dog-friendly to some extent.

Do you see the bluff in the background? How about we climb up there and check out the view! First, we need to go over the bridge seeing the San Dieguito Lagoon inlet is far too deep to walk through today. 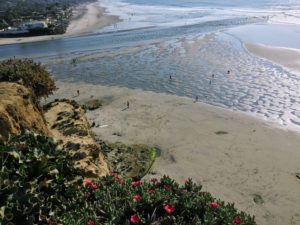 Looking down, do you see the part of the bluff below on the left? Here is the cliff where the infamous “Del Mar Man” skull was discovered fully intact in 1929. Malcolm Rogers, an archeologist from the San Diego Museum of Man, made the discovery, and it was later determined to be over 5 000 years old.

Looking east from up upon the bluff, we have a fantastic view of the northwestern part of the lagoon and the Del Mar Racetrack, built here in 1937.

I have written a bit about the North Bluff Preserve in an earlier post-Five Hidden Gems in San Diego if you are interested in learning more about this location.

End of the Journey Summary 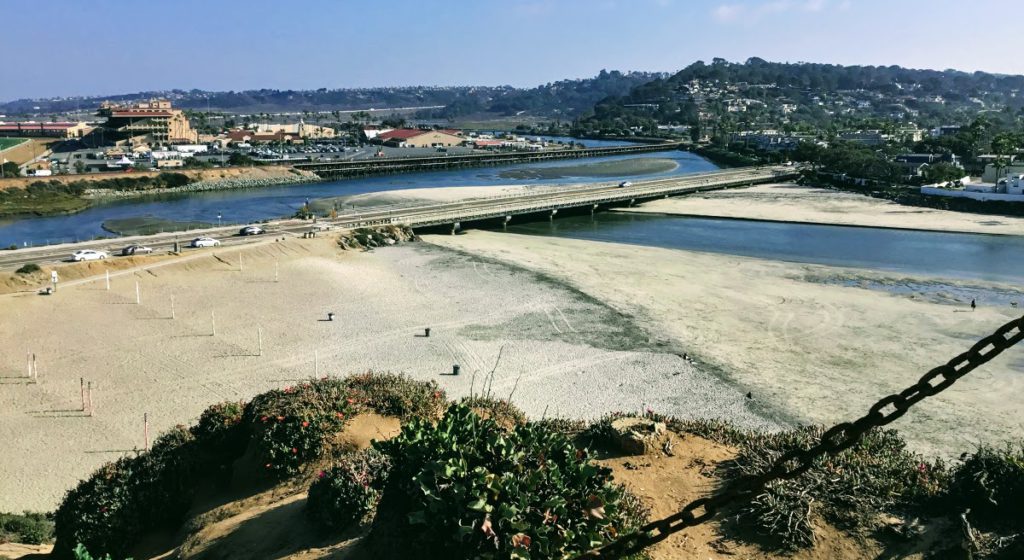 So what do you think? Would you be interested in walking on the last final miles of the Coast to Crest Trail? From my starting point of the journey, I walked just under 5 miles in total. But if that seems too much, I will list several other starting points if you prefer.

I will be listing west to east.

San Dieguito River Park-This is where I started

Well, I sure hope that you enjoyed yourself on our adventure and will be able to come here and see all of the beauty and wonder in person!

Please feel free to leave any questions or comments down below.